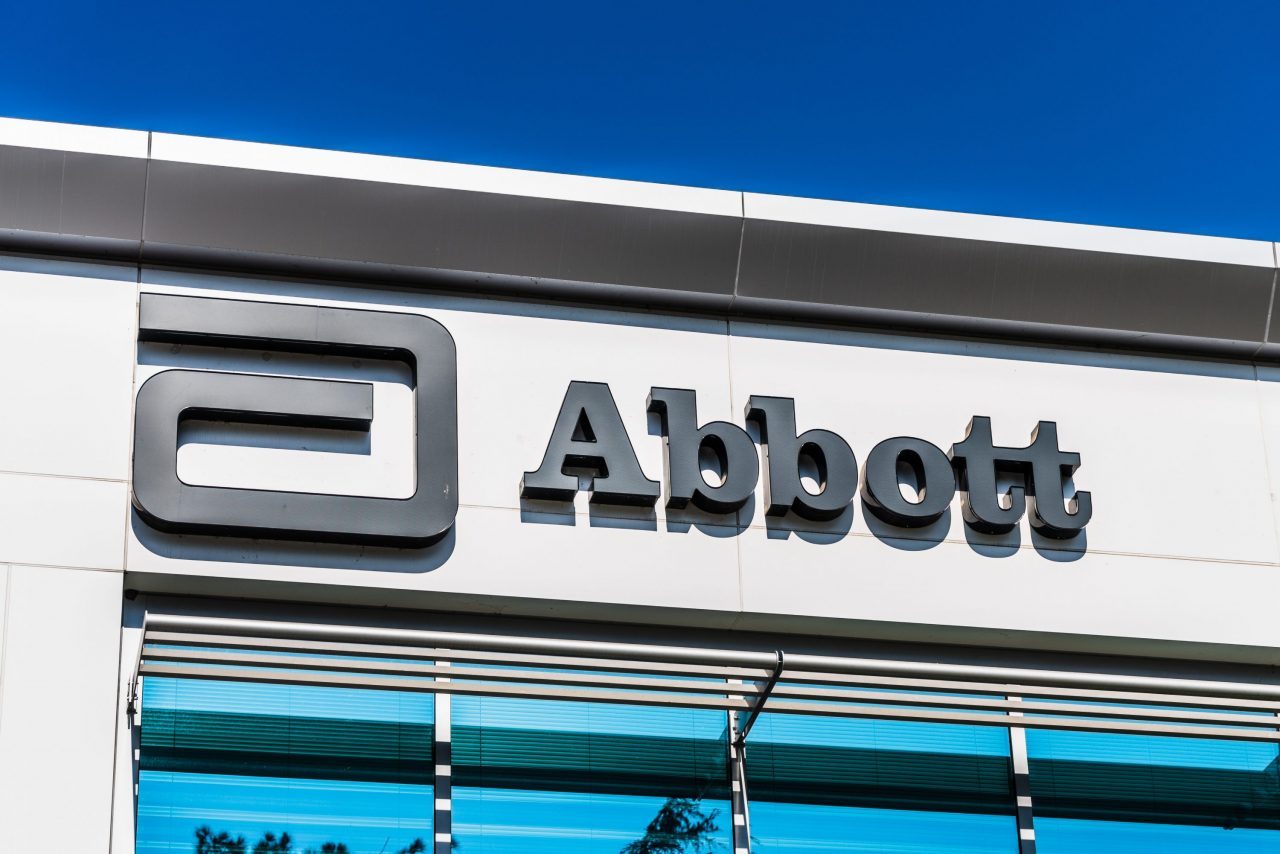 On May 5, 2022, Dexcom’s patent lawsuit against Abbott in the United States District Court for the Western District of Texas was terminated and transferred to the Delaware District Court. The suit marks a new patent dispute between Dexcom and Abbott in the U.S. over Continuous Glucose Monitoring (CGM) devices.

According to a report by ResearchAndMarkets, the U.S. CGM market was estimated at around US$ 2.8 billion in 2021 and is predicted to hit US$ 6 billion by 2028. Dexcom and Abbott are two key players in this growing market. As the CGM market continues to grow, the fight between the two long-time competitors will have significant implications for the U.S. and European CGM markets. In this article, we focus on Dexcom and Abbott’s fight in the U.S.

The Legal Dispute Between Dexcom and Abbott

On June 30, 2021, Dexcom filed a lawsuit against Abbott in the Western District of Texas, alleging that Abbott’s FreeStyle Libre, a Continuous Glucose Monitoring (CGM) system, infringed five of its patents.

The lawsuit is the first patent suit over CGM technology after the 2014 settlement and license agreement between the two companies expired in March 2021.

Dexcom and Abbott’s Fight Over CGM Technology in the U.S. 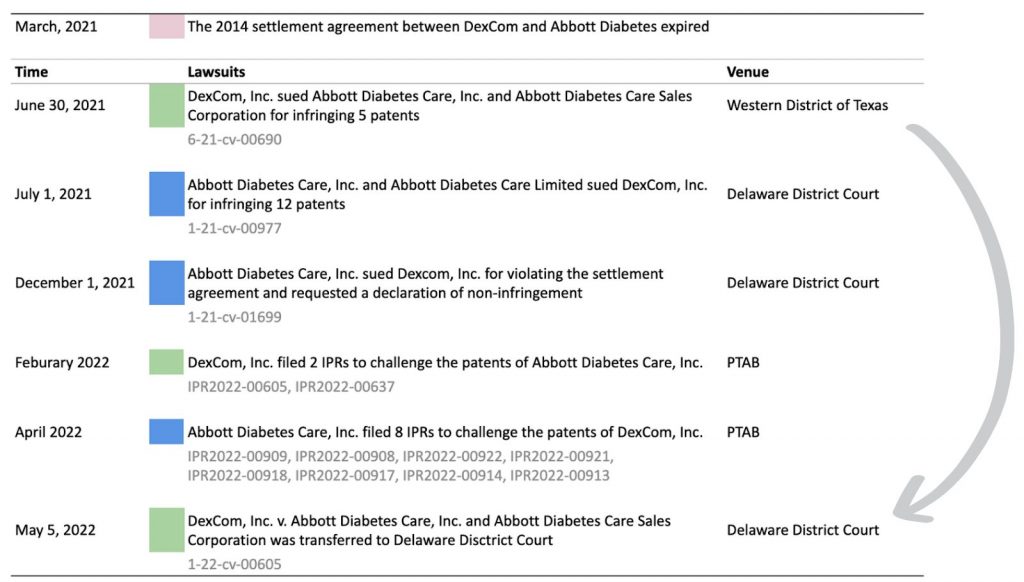 On December 1, 2021, Abbott sued Dexcom, claiming that Dexcom violated the 2014 settlement agreement and that Abbott did not infringe on Dexcom’s patents. Dexcom filed two IPRs against Abbott in February 2022, and Abbott later filed eight IPRs against Dexcom in April 2022.

At the end of the year, on December 1, 2021, Abbott sued Dexcom again, claiming that Dexcom violated the 2014 settlement agreement and that Abbott did not infringe on Dexcom’s patents.

In 2022, Dexcom filed two IPRs against Abbott in February, which was followed by Abbott’s eight IPR petitions filed against Dexcom in April.

Using Quality Insights, we examined if a patent has been rejected over novelty prior art reference(s) and the potential novelty prior art that might be used to challenge its patentability. The analysis was conducted on August 5, 2022.

Using Patentcloud’s Quality Insights, we found 12 to 87 potential prior art references highly relevant to Dexcom’s asserted patents (see “No. of Potential Novelty Prior Art”). These prior art references are generated mainly from a patent novelty citation network. They have never been considered as prior art before, and their eligibility as prior art has been verified.

From the perspective of patentability, the patents Dexcom asserted against Abbott have significant quality issues. Four of the five patents-in-suit have been rejected over prior art based on 35 U.S.Code § 102 during prosecution. Using Quality Insights, we found that the five patents each have several potential prior art references.

Clearly, both parties have weak spots regarding their asserted patents. Our findings show that Dexcom needs to be more cautious with Abbott’s counterclaims and challenges in court and at the PTAB based on the patent analysis.

If you are interested in examining the novelty or non-obviousness (§102/§103) grounds or want to find more prior art details of the patent-in-suit, just click on the Quality Insights free trial button below.

Using Due Diligence, we examined Dexcom’s and Abbott’s patent portfolios in the aspects of patent deployment, quality, and value to evaluate their standings. 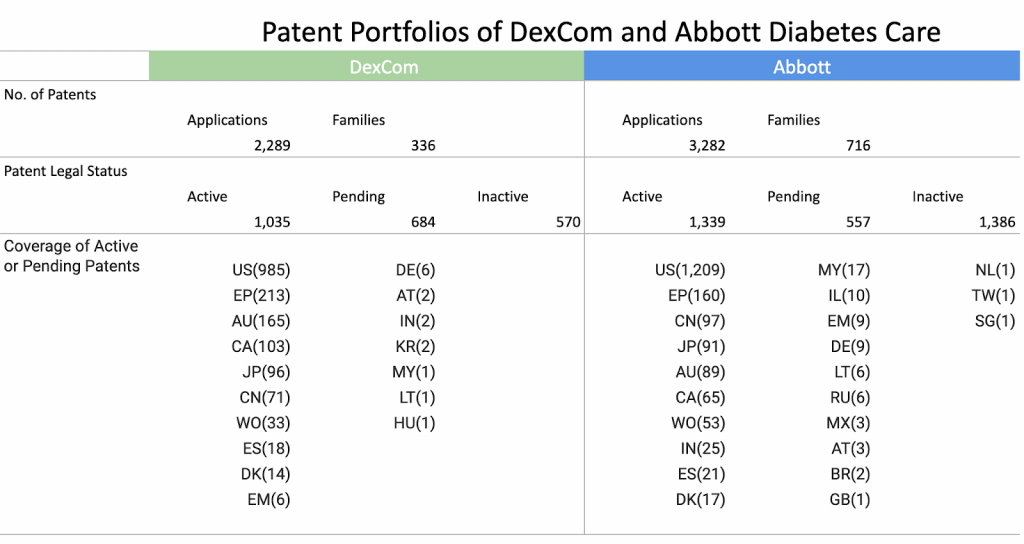 In terms of regional deployment, it seems Dexcom and Abbott have common interests in the U.S., Europe, Australia, Canada, Japan, and China. Abbott maintains its patent portfolio in more jurisdictions. Abbott owns patents that are active or pending in 23 countries, and the number for Dexcom is 17.

In addition to portfolio size, we compared the proportions of high-value and high-quality patents between Dexcom and Abbott.

Based on the proprietary algorithm developed by InQuartik, each patent in the database is assigned one of the six value/quality rankings: AAA, AA, A, B, C, or D. Patents ranked A, AA, or AAA with the Patent Value Ranking have a patent value score that is greater than or equal to 75% of the patents.

Patents ranked A, AA, or AAA with the Patent Quality Ranking have a patent quality score that is greater than or equal to 75% of the patents (see the graph below).

Using Due Diligence, we analyzed Dexcom’s and Abbott’s patents regarding “diagnosis; surgery; identification” (International Patent Classification A61B), the field in which both companies have the most patents. We focused our analysis on U.S. patents since it is the primary market for Dexcom and Abbott.

We first compared the proportions of high-value U.S. patents between Dexcom and Abbott. According to the value comparison chart below, around 85.3% of Dexcom’s U.S. patents in diagnosis, surgery, or identification are ranked A or above, much higher than that of Abbott (66.3%).

As for quality ranking, the proportion of high-quality U.S. patents in IPC A61B is fairly small for Dexcom and Abbott, and the ratio of D-ranked patents is high for both companies.

You can check out the full interactive Due Diligence reports we used in this article for free.

Just click the links to each company’s report below!

In the following section, we examined the patent families of Dexcom that have been cited by the patent examiners as novelty prior art to reject Abbott’s patent applications based on 35 U.S.Code § 102. We did the same analysis with the patent families of Abbott. The analysis allows us to identify the patents that Dexcom or Abbott could potentially enforce against each other if either party’s products are found to be using the patented technologies of the other party.

Using Due Diligence, we found that members of 30 patent families in Dexcom’s portfolio have been cited as novelty prior art in Abbott’s patent applications. The chart below lists the top 10 patent families with the most citations.

Abbott has 26 patent families whose members have been cited as novelty prior art by the patent examiners when reviewing Dexcom’s patent applications. The top 10 patent families with the most citations are shown in the chart above.

In short, both Dexcom and Abbott have plenty of patent families whose members might potentially be used to assert against each other. It suggests that more patents might be brought to court if the patent dispute between the two companies becomes more intense.

Also, in both Dexcom’s and Abbott’s cases, half of the patent families involved are captured by our novelty prior art citation data. The results suggest that novelty prior art data makes it easier to search for patents that might be asserted against potential target companies.

Using Patentcloud‘s Quality Insights, we examined the patents-in-suit for both cases and found many of the asserted patents, either by Dexcom or Abbott, have quality issues.

Portfolio analysis shows that Dexcom and Abbott have similar numbers of active or pending patent applications. We found that Abbott maintains patents in more patent jurisdictions than Dexcom and that Dexcom owns a larger proportion of high-value patents than Abbott in the area of diagnosis, surgery, and identification.

Finally, our findings show that both Dexcom and Abbott have a significant amount of patent families whose members might be used to assert against the other side. The results suggest that both parties might assert more patents against each other if the patent dispute intensifies.

We hope you have found our patent analysis and insights interesting! You can generate a report for any company’s patent portfolio by clicking on the Due Diligence free trial button below.