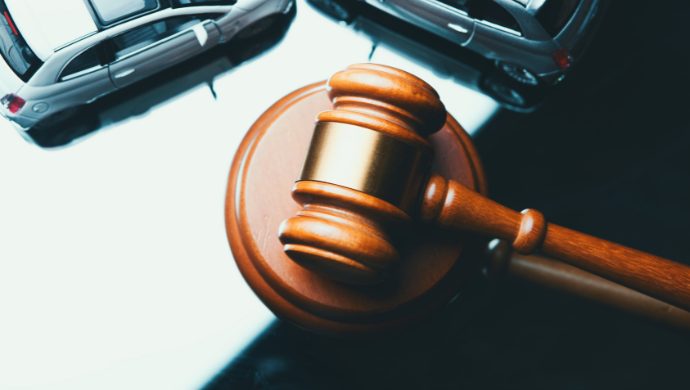 On August 23rd and September 12th, Daedalus Prime LLC, an NPE, filed six lawsuits and three ITC cases against semiconductor companies such as TSMC, Samsung, Qualcomm, Arrows, MediaTek, and NXP, as well as their distributors and customers, including Mazda Motor Corp, Mercedes-Benz, and more. In the complaints, Daedalus alleges that these companies have infringed 20 of its U.S. patents on semiconductor and microprocessor devices.

All 20 patents-in-suit were among the batch of patents Daedalus acquired from Intel this June (2022). According to an IAM article (subscribed content), at least 120 patents were transferred to Daedalus.

We will look at the litigation campaign initiated by Daedalus by analyzing the quality issues of the patents-in-suit and examining the NPE’s patent portfolio.

About the Cases (so far)

Daedalus Prime LLC is a non-practicing entity run by former Altitude Capital Partners’ managing director and general counsel, Ed Gomez. The company’s patent portfolio currently includes 125 patents that were mostly acquired from Intel. We will be looking at the portfolio later on in this article.

Of the 20 patents-in-suit, some were used several times in various district court or ITC cases. Here is a summary of the cases in the campaign and the patents that were asserted more than once. 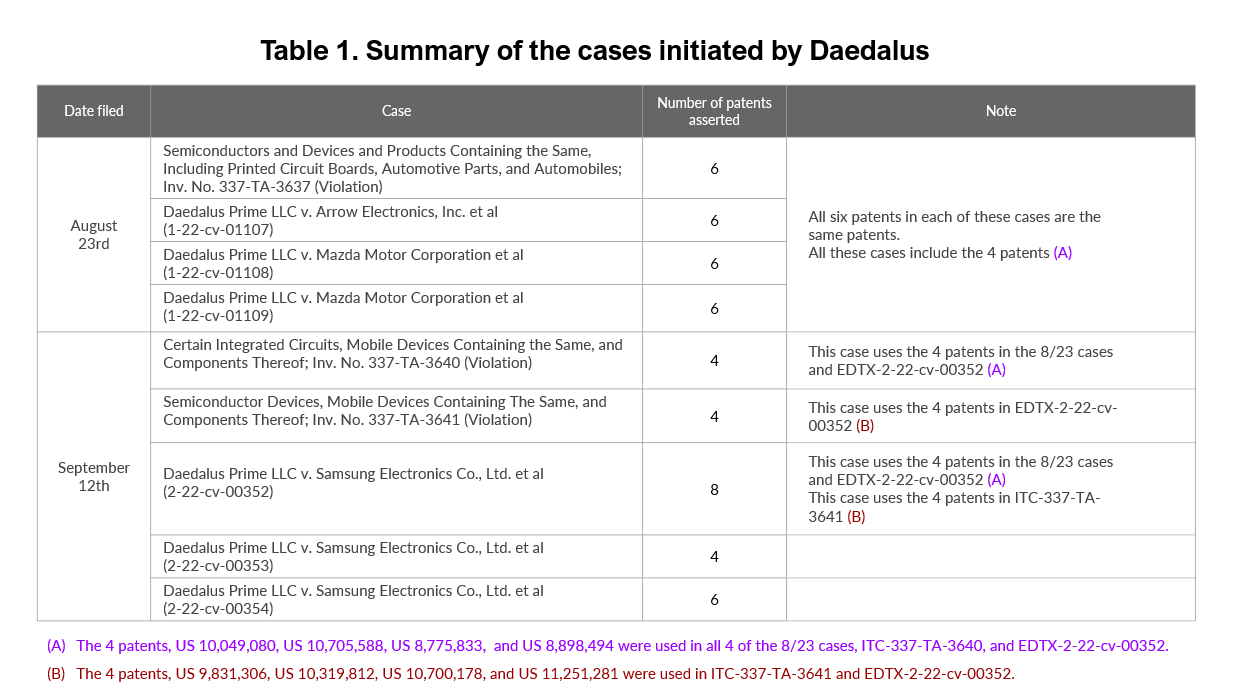 Here is the list of the 20 patents-in-suit and their corresponding cases. 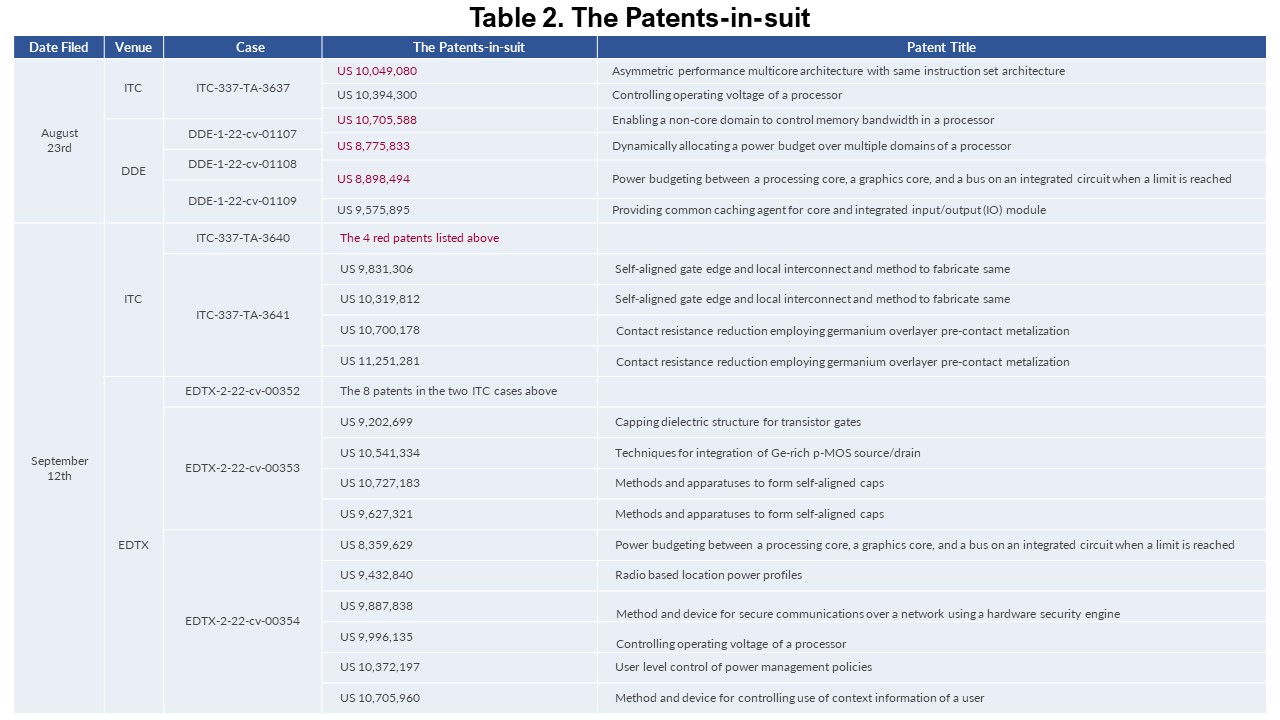 Looking for Potential Quality Issues Among the Patents

Using Quality Insights, we examined the quality issues of the 20 patents-in-suit. We not only compiled the issues found in the patents’ prosecution and PTAB history, but we also unearthed the potential issues found, such as the indefiniteness terms not disclosed by the patent’s specifications and the number of potential novelty/non-obviousness prior art found.

The comprehensive list is as below in Table 3. The columns in blue are issues found in the patent’s history, and those in red are those we discovered using Quality Insights. 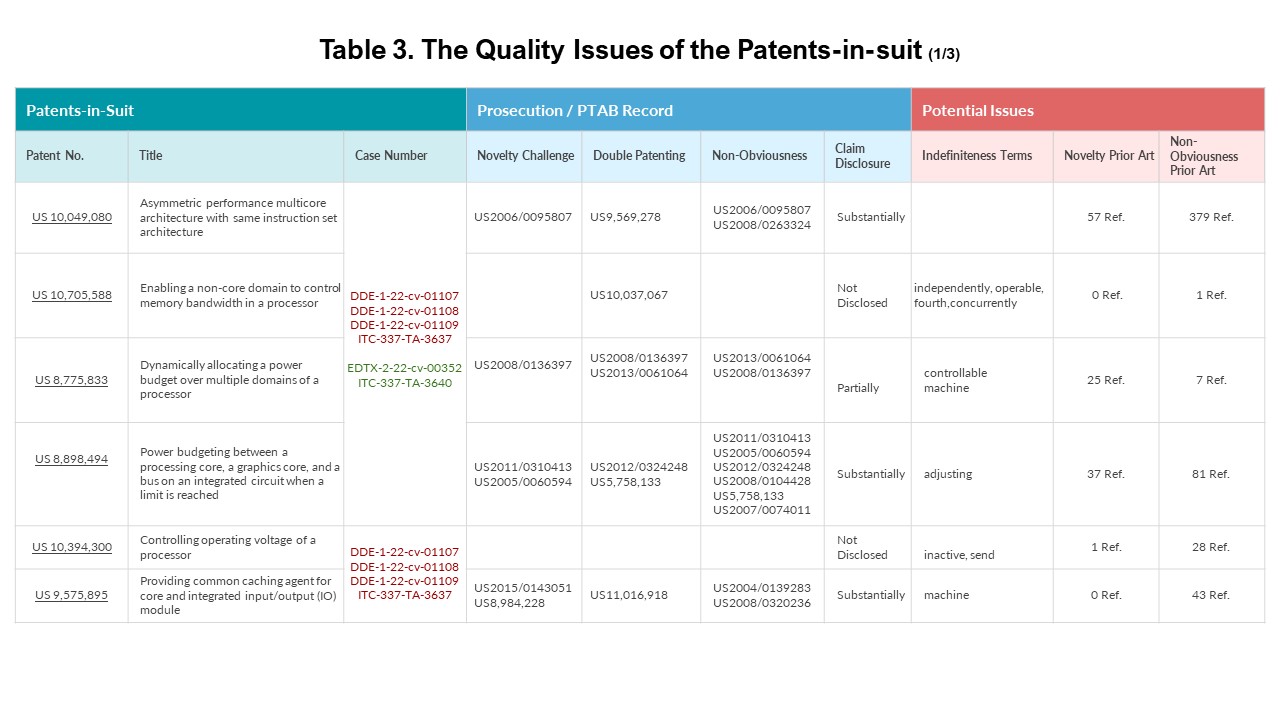 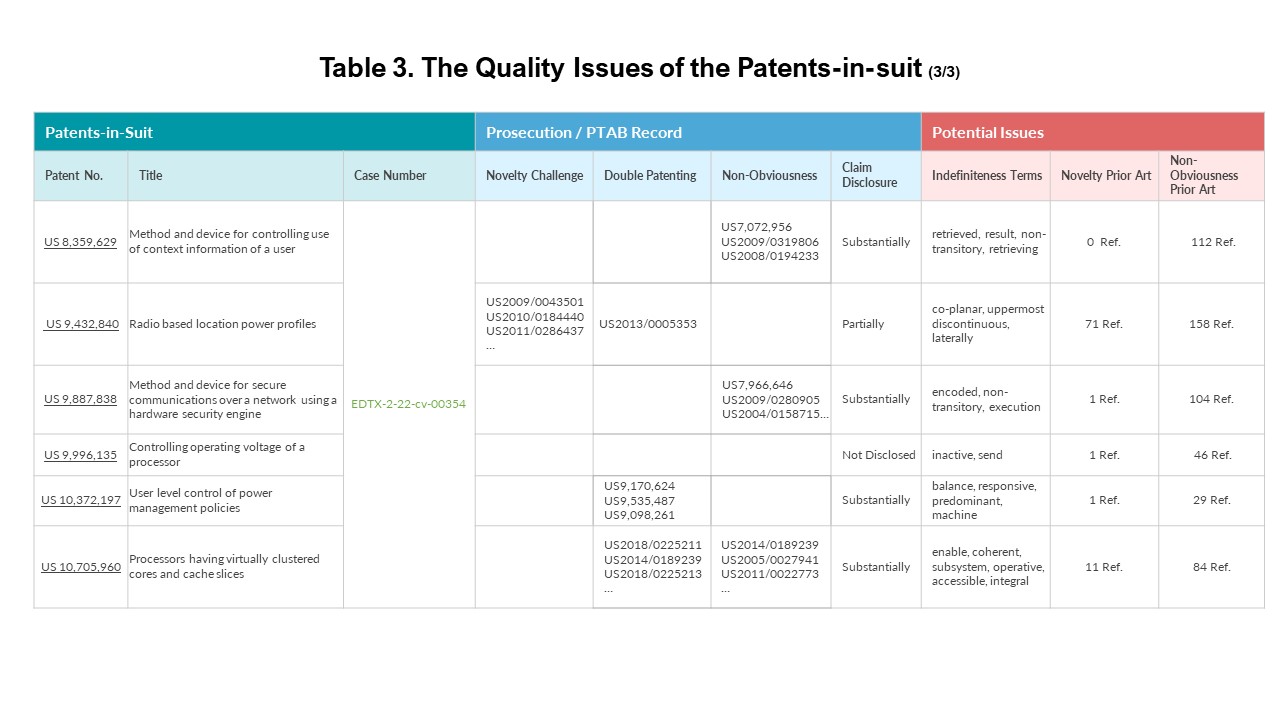 Looking a just one patent

To look a bit deeper into the details, let’s use the US 9,627,321 patent as an example. We can see that this patent encountered a novelty challenge which cited the US 5,470,789 patent as prior art. The ‘321 patent was also challenged with non-obviousness issues on the basis of the two applications and one patent listed in the table.

We can also see that the ‘321 patent’s claims were substantially disclosed during prosecution and post-grant proceedings. The automated claim chart in Quality Insights compares claim #1 to the non-final rejection filed on 2017-09-06. The chart shows that the current claim #1 of the ‘321 patent is “substantially disclosed” by US 5,470,789 (“Process for fabricating integrated circuit devices”) and US 2009/0283499 (“Fabrication of semiconductor interconnect structure”), which the examiner cited as an “§103” prior art reference during prosecution.

As for the potential issues, Quality Insights identified eight prior art patents through novelty (§102) citations and 37 non-obviousness (§103) citations. These are potential prior art references not previously considered in prosecution and post-grant proceedings.

Possible Impact of the Campaign

As always, we are curious whether a lawsuit or campaign will further escalate or impact other entities. Nearly all of the 20 patents-in-suit (which correspond to 17 patent families) and their family members (totaling 74 patents) are deployed only in the U.S., except for two German patents.

This coverage information indicates that the patents Daedalus enforced in the campaign pose litigation threats primarily in the U.S. regional market and have a low chance of being enforced in other jurisdictions. Also, the patents-in-suit and their family members are expected to expire between 2030 to 2034.

The patent portfolio of Daedalus Prime consists of 125 patent applications that correspond to 38 families.

82.4% of the patent applications in Daedalus’ portfolio are active; 8% are still pending applications, and only 9.6% are inactive. 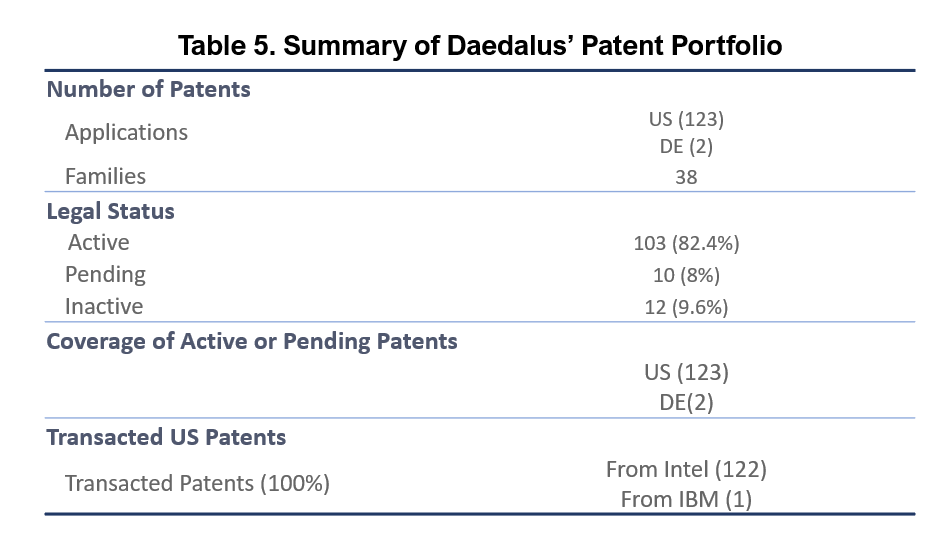 Nearly all Daedalus’ patents and applications are only deployed in the U.S., except for two German patents*. As expected of an NPE, Daedalus’ patents were all transferred from other companies. The majority of the patents (122 patents) were acquired from Intel.

*According to an article by IAM, Daedalus filed another lawsuit in Düsseldorf Regional Court in Germany against Samsung, asserting its two German patents. These two patents are included in the portfolio analysis, but as we are unable to confirm more details about the German case at this time, we have omitted the two patents from our previous analysis of the patents-in-suit.

The Due Diligence report of Daedalus’ patent portfolio shows that 34.21% of the patent families have a higher likelihood of being invalidated, and 94.74% of the families have quality issues.

34.21% of the patent families have family members that failed to pass the examination or have been revoked in at least one country. Abandoned or revoked members in a patent family pose potential risks to the rest of the family as they point to the possibility of how family members may also be challenged or invalidated.

As for the percentage of eligibility and novelty issues found among the active/pending U.S. applications, 94.74% of the families have quality issues in their prosecution and PTAB history. The novelty issues of the portfolio are quite significant. 25 out of 36 families (69.4%) had encountered §102 issues in the past.

We also analyzed the Quality and Value Rankings of Daedalus’ patents. We compared Daedalus’ patents in the IPC H01L class (“Semiconductor devices; Electric solid state devices not otherwise provided for”) with the overall market. This is the field in which the defendants have the most patents.

Comparing value, we can see that around 52.7% of Daedalus’ patents in IPC H01L are ranked A or above, much higher than the overall 17.3%.

Looking from a macro perspective, Daedalus’ portfolio seems to have higher value patents compared to the top owners in the field.

Due Diligence can identify potential buyers or licensees of a patent portfolio in its Potential Target chart. The targets are considered technology followers of the company’s portfolio based on novelty-citation information and, therefore, potential monetization targets.

Besides TSMC and Samsung, which already got hit by Daedalus, the example here shows that family ID 46233263 (US 8,901,537) was cited by the patent applications of Global Foundries, United Microelectronics, and Applied Materials, making them potential targets of the portfolio and should be wary of future litigations.

After examining the patents-in-suit and analyzing Daedalus’ patent portfolio, we can summarize our findings below.

For the 20 patents-in-suit, we found various potential quality issues. However, there are still patents with no apparent issues that the defendants will find more difficult to invalidate. Since the majority of the patents-in-suit are U.S. patents, the litigation campaign may continue only within the U.S.

Looking at the analysis of Daedalus’ patent portfolio, we found a significant percentage (69%) of patent families that have members challenged with novelty rejections during prosecution. Despite the quality issues, Daedalus appears to have a portfolio with more high-value patents compared to the top owners in the same field.

In addition, the novelty citation data in the Due Diligence report identified other potential targets that should be wary of future litigations initiated by Daedalus. Daedalus has already enforced its patents against TSMC, Arrows, MediaTek, Samsung, Qualcomm, NXP, Mazda Motor Corp, Mercedes-Benz, and more. Other companies, such as GlobalFoundries, United Microelectronics, and Applied Materials, are potential targets that may be threatened by the possibility of more patent enforcement initiated by Daedalus in the future.

We hope you have found our patent analysis and insights interesting! You can conduct your own quality analysis of a U.S. patent with Quality Insights. Just click the button below!