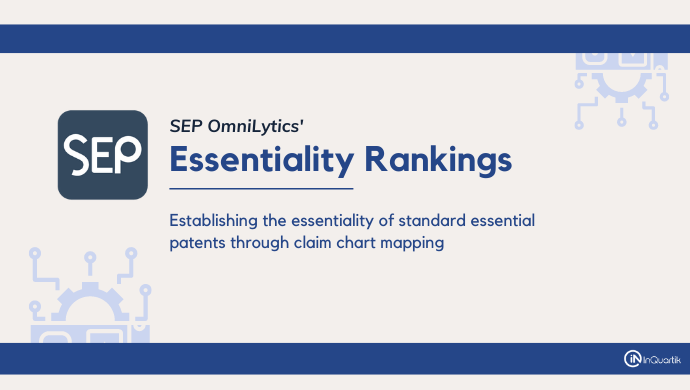 As Patentcloud’s SEP OmniLytics continues to find new ways to make SEP work easier, our team has developed the Essentiality Rankings indicator — derived from claim chart mapping —  which is designed to aid in determining a standard essential patent’s essentiality.

Let’s take a look at the Essentiality Rankings and relevant terms.

SEP OmniLytics’ Essentiality Rankings and its contributing indicators are exclusive features designed to assist our users by sorting out the standard essential patents that need to be further scrutinized and assessing the effort to do so.

As discussed in our over-declaration article, several studies have found that not all SEPs are truly essential, suggesting that only approximately 50% of the patent families examined have at least one patent that is essential or probably essential.

To help alleviate this issue, Patentcloud’s SEP OmniLytics Team has come up with Essentiality Rankings to conduct preliminary discernment of the essentiality of SEPs.

How do Essentiality Rankings work?

How is claim chart mapping conducted?

For both TS Relevancy and Claim Scope Support, an automated claim chart is generated by mapping keywords to find a textual correlation between the declared TS, independent claims, and the patent specification. The mapped keywords include critical keywords and general keywords.

How are the SEPs ranked with Essentiality Rankings?

SEP OmniLytics‘ Essentiality Rankings include High, Medium, and Low rankings for the ETSI-declared SEPs in our database. A “High” ranking can only be derived from “High” rankings for both the TS Relevancy and Claim Scope Support indicators. However, a SEP with a “Low” ranking does not necessarily indicate that it is not essential but simply indicates that further examination is required to establish its essentiality.

Exploring the Commercialized NG-RAN Tech in 5G — Who Are the Key Standard Essential Patent Holders?