Welcome to Part 2 of our Ericsson vs. Apple article!

In Part 1, we examined the quality of the patents Ericsson and Apple brought out from their weaponry in the lawsuits and found that Ericsson’s patents-in-suit show better quality, especially the standard essential patents (SEPs) Ericsson used.

If you want a recap of events in the fight, you can link back to our first article: The Dispute.

In this installment, we will be looking at the broader scope of things — Ericsson’s and Apple’s 5G and cellular standard essential patent portfolios.

In Apple’s countersuit against Ericsson (EDTX-2:21-cv-00460), Apple argues that it should get better terms (especially lower fees) than the previous agreement since it now owns fives times as many cellular SEPs.

Here is an excerpt from Apple’s complaint:

“63. Since the parties’ 2015 agreement, Ericsson’s overall share of declared cellular SEPs has decreased by approximately 25% while Apple’s share has increased by approximately 500%. Today, Apple holds a share of declared 5G patent families that is comparable to Ericsson’s share. Given these facts, under any cross-license between Ericsson and Apple, Apple’s net payments to Ericsson should decrease as compared to under the 2015 license.”

The two main points Apple brought up are:

This article will first examine the growth of cellular SEPs declared by the two companies and then determine Ericsson and Apple’s actual position 5G SEP landscape as a better stance provides SEP owners better bargaining power in licensing agreements.

Note: We will mention SEP OmniLytics’ various filters in this article, such as the “Well Maintained” and “Widely Deployed” filters. You can see the definition for each filter in our SEP data article.

The numbers in the table below show the LTE and 5G (cellular) SEPs that are active and were declared by Ericsson and Apple.

Here are the growth numbers only for better comparison:

As you can see, we found the growth percentages that are most likely the ones mentioned by Apple in its complaint (highlighted red in the table). However, the two percentages do not seem to be parallel in comparison, as Apple’s 502.9% growth is in the number of SEPs and Ericsson’s 26% decline is in its global share (%).

Although it seems that Apple shows a bigger growth spurt, the total of SEPs it declared still falls greatly behind Ericsson’s (Apple’s 6,070 SEPs compared to Ericsson’s 10,102 SEPs by the end of 2021).

We also wanted to see if Apple was investing more and concentrating its efforts on its cream-of-the-crop SEPs instead of merely adding more SEPs to its portfolio for quantity’s sake. In other words, we wanted to find out if Apple’s refined SEPs show better growth.

To do this, we examined Ericsson’s and Apple’s LTE & 5G SEP portfolios that are active, Well Maintained, and rank high in Essentiality Rankings.

The Well Maintained filter in SEP OmniLytics indicates SEPs without any abandoned, lapsed, withdrawn, or revoked family members. This is behavioral data based on the patent owner’s self-assessment and reflects the owner’s perception of a SEP’s essentiality or potential value.

Here we compare the growth of the two companies’ refined cellular SEP portfolios:

Let’s look at the difference between the two portfolios to see if Apple is catching up to Ericsson.

These findings indicate that Apple is already closing the gap between the two companies in terms of global share (%), but will need to add more refined cellular SEPs to catch up to Ericsson.

Onto the next claim — let’s see if we can determine whether the two companies’ 5G SEP portfolios are comparable or not.

First, let’s look at the global 5G SEP landscape as a whole and where Ericsson and Apple stand. The top 15 companies with the most 5G newly-declared SEP families are as follows.

Here is how Ericsson and Apple compare to the top 15 5G SEP owners: 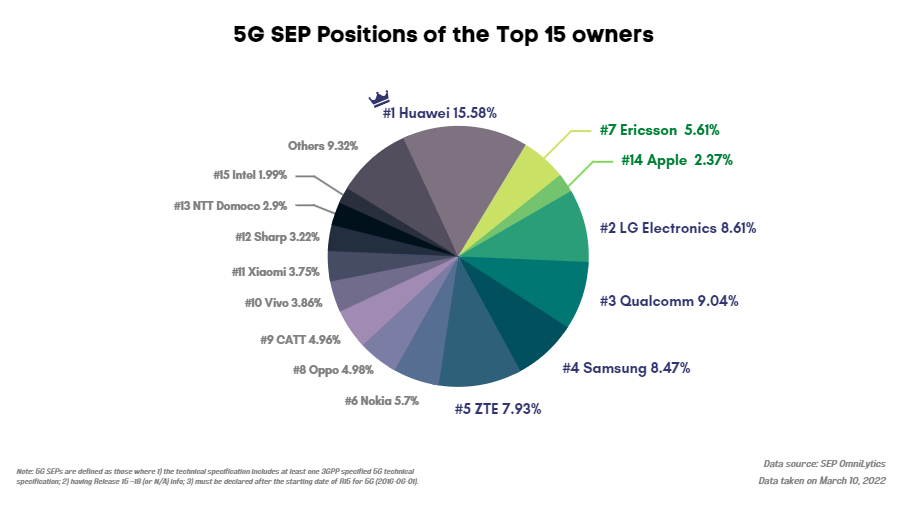 As a current owner, Ericsson’s 5G SEP portfolio consists of 2,223 patent families and 10,045 applications. Among these applications, Ericsson has 3,616 active patents (36% of its portfolio), taking up 4.1% of the global 5G SEPs.

Looking at the coverage status and remaining life of the SEPs, Ericsson’s 5G portfolio is deployed in 52 countries, with over 37 countries having more than two applications. Its active 5G SEPs cover 34 countries. All patents will expire by 2041, with the last patent expiring in the U.S. in 2040.

Apple’s 5G portfolio is deployed in 14 countries, with its active standard essential patents covering 12 countries. Except for Singapore, which has only one application, all other countries have a coverage of over two applications.

We can also get a glimpse into the two companies’ current pending applications to get an idea of their portfolios’ future potential with the pie charts below.

Determining the position of the two companies’ 5G SEP portfolios

After getting an overall idea of the size of each 5G SEP portfolio, let’s look a bit deeper at the quality of the portfolios and what kind of position each company holds.

We used SEP OmniLytics’ “Well Maintained” and “Widely Deployed” filters along with our Essentiality Rankings to find how the two companies’ active 5G SEP portfolios perform in quality and to filter out those 5G SEPs that seem to be “merely” declared.

Looking at our preliminary findings, we found that the factor that affected the results the most is the Widely-Deployed filter. Apparently, Apple’s widely-deployed 5G portfolio is much smaller than most SEP owners, dropping to 26th place (among 33 companies).

In comparison with Ericsson’s 5G portfolio, Apple’s 5G SEPs do not cover country jurisdictions such as Spain, Canada, Poland, Hungary, Mexico, Denmark, Malaysia, and several more. This will not significantly affect Apple’s licensing negotiations if discussing a global royalty rate, however, Ericsson will definitely have the advantage when negotiating for regional rates. For example, if Apple imports or sells a significant volume of its products in Spain, where Apple’s portfolio is not deployed, Ericsson will have more bargaining power.

Now that we have sorted out the 5G SEPs that show better quality let’s pinpoint the two companies’ diamond 5G SEP portfolios.

Diamond portfolios, as its name suggests, are more substantial in quality and can better withstand challenges. Diamond SEPs in this article are defined as those which are “Well Maintained,” have high Essentiality Rankings, and are, of course, active (excluding “Widely Deployed”).

Here are the numbers for Ericsson and Apple’s 5G diamond portfolios:

From this table, we can see that the 5G diamond SEPs families both companies own are quite close in numbers, but despite having a lower number of 5G SEPs, Apple’s diamond percentage exceeds that of Ericsson’s.

We can also see that Apple’s portfolio has a larger percentage of high-quality SEPs.

Meanwhile, Apple’s portfolio shows around 49% of its diamond 5G SEPs deployed in the U.S. have a transaction history. If we look a bit closer, we can see that most of the transferred patents were acquired from Intel.

Coming back to Apple’s claims, we found that:

Compared to other 5G SEP owners, Ericsson has announced a higher royalty rate of US$ 2.50 ~ US$ 5.0 per device. Just last year (2021), Huawei announced its 5G royalty rate at a cap of US$2.50 for each unit, which is the lowest minimum for Ericsson.

In Apple’s complaint, Apple argues that it should get better terms for a licensing agreement with Ericsson, implying that Ericsson’s proposed royalty rates are too high. This brings to light the question of how reasonable Ericsson’s 5G royalty rates are and may become a future ground for other SEP implementers to challenge Ericsson with in the future.

Update: You can continue reading about this case in Part 3 — Getting a Glimpse of the PTAB Petitions Apple Launched Against Ericsson.

We hope you gained some interesting insights in this two-part article. If you would like to navigate through SEP OmniLytics to find more insights or just to examine a certain SEP’s claim chart, click the button below and start today with the 7-day free trial!

Or Contact Us if you have any questions or want to know more about our bundle plans!

Exploring the Commercialized NG-RAN Tech in 5G — Who Are the Key Standard Essential Patent Holders?