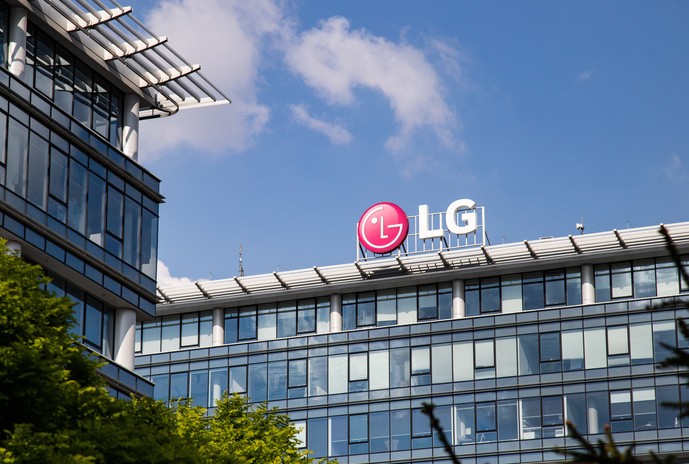 On April 5, 2021, LG Electronics Inc. announced that it will shut down its mobile phone business unit as of July 31 this year. In the past five years, LG faced losses accumulating to approximately US$ 4.5 billion in smartphones. Entering the mobile phone market in 2010, the South Korean company was once the rival of Samsung in launching new and unique products, such as the bendy LG G Flex or the modular LG G5. LG’s announcement also stated that its “[c]ore technologies developed during the two decades of LG’s mobile business operations will also be retained and applied to existing and future products.”

Just a few weeks after the announcement, rumors have surfaced suggesting that Samsung and several non-practicing entities (NPEs) in China, South Korea, and the U.S. may already be eyeing LG’s standard essential patents (SEPs) in smartphones, telecom equipment, and electric vehicles, especially for its SEPs that cover 5G technologies.

LG responded by simply stating they are still reviewing how their current network patents can be used in other sectors such as IoT or self-driving vehicles. But it is still highly probable that LG will allocate some of their current patent assets as the patent maintenance fees alone may approximate US$ 2.6 million each year.

This article will take a look into LG Electronics’ standard essential patent portfolio, from its overall global stance to its LTE and 5G radio technologies and its diamond patent portfolio.

According to Patentcloud’s Due Diligence, as of May 21, 2021, LG Electronics has over 284,000 patent applications in its patent portfolio. In this article, we will focus on the active or pending standard essential patents that LG currently owns to better grasp the actual strength of its SEP portfolio.

First, we will take a quick look at LG’s telecommunications-related patents, followed by an in-depth analysis of LG’s SEP portfolio. Some aspects covered will include LG’s LTE and 5G SEPs, the overall quality of its SEP portfolio, and its diamond patent portfolio. Hopefully, our findings can give our readers a more detailed view of LG’s SEP assets.

A quick note: the patents or SEPs referred to in this article include only the active or pending applications in the portfolio. Also, the SEP families mentioned here refer to the simple family definition. For more on our definitions and criteria, please see our article on data quality here.

Also, the data and numbers in this article were taken from Patentcloud’s SEP OmniLytics and Due Diligence on May 21, 2021.

Looking at the top 5 companies holding SEPs, we did some digging into the number of telecommunications patent families each company holds. LG comes in 5th place with 25,966 families. Samsung takes the crown by owning 57,452 patent families covering telecom technology (Figure 1). 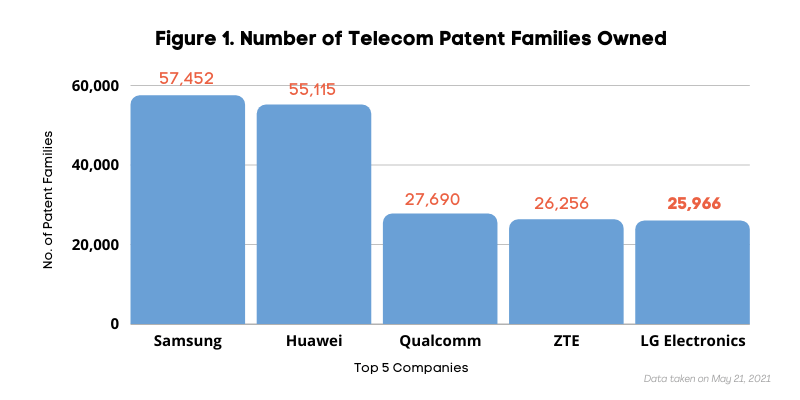 However, if we compare the number of telecom families with the number of ETSI-declared LTE and 5G SEP families, LG takes the throne with 20.94%, followed by Qualcomm with 18.21%. Samsung shows a larger difference with only 8.29% of their telecom patent families declared as SEPs (Figure 2).

Among the global total of 51,067 LTE and 5G active and pending SEP families, LG’s 5,436 families take up a proportion of approximately 10.6% of the total.

If we examine LTE and 5G SEPs separately, we can see from Table 1 below that LG ranks third in both the number of LTE SEPs owned and the number of 5G SEPs owned, following Huawei and Samsung. This continues to show LG’s significant position in the LTE/5G SEP market.

The Quality of LG’s SEP Portfolio

Now, let us now take a deeper look into LG’s SEP assets to see if we can decipher the quality of LG’s SEP portfolio.

Feel free to navigate SEP OmniLytics with us as we continue to examine LG Electronics’ SEP Portfolio! Just click on the “Company Profile” dashboard on the left and proceed to LG Electronics portfolio.

We can also examine LG’s top-tier SEP families — those that are well-maintained and have at least one active family member — to get another viewpoint of the portfolio’s quality. SEP OmniLytics’ Well-maintained filter can dig up those SEP families without any abandoned, lapsed, withdrawn, or revoked members. We will address the SEPs in this group as the top-tier SEPs since the essentiality and self-evaluation of these families are relatively superior to that of other SEPS.

Here we can see that LG has a fairly high percentage of top-tier SEPs with 60.78% in comparison with the other top 5 companies (Table 2), only surpassed by Huawei with 62.84%.

Also, among LG’s 5G-exclusive SEPs, 93.35% of the families are top-tier SEPs. This indicates that LG has invested much time and effort in maintaining its 5G-exclusive SEPs, perhaps even more so than its LTE SEPs. The percentages of active LTE SEPs both exclusive and non-exclusive are 67.5% and 74.4% respectively. 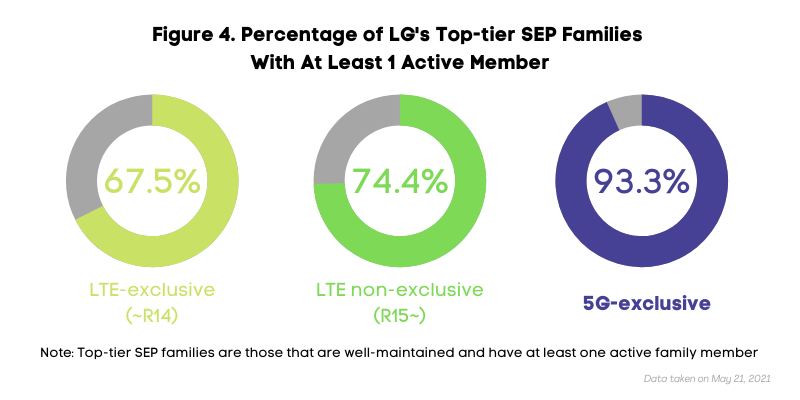 Looking at LG Electronics’ 1,853 5G-exclusive top-tier SEPs, over 50% are registered in the U.S. and at the WIPO. The remaining SEPs are deployed in Europe, China, South Korea, and Japan, with the most granted in South Korea, followed by those in the U.S. and Europe. The lowest number of grants are those in China.

If we look even further at LG’s 5G-exclusive top-tier SEP families that are deployed in over 10 jurisdictions, (SEP OmniLytics’ “Widely-deployed” filter), we can see the 32 SEP families that are mainly deployed in the U.S. and South Korea, followed by those in Europe, Japan, and China. We can also see that most of the active SEPs are in the U.S., South Korea, and Japan. 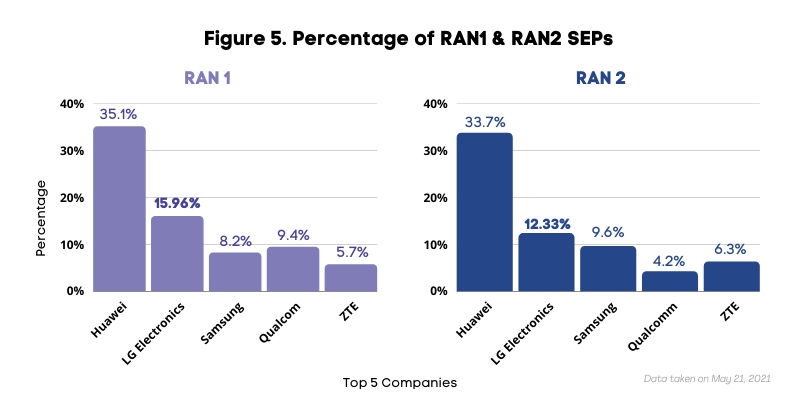 As for the 3GPP technical specifications, we can see that LG’s 5G-exclusive top-tier SEPs are mostly concentrated in TS 38.211~214, namely the New Radio physical layer technology.

Globally speaking and under the same criteria (5G-exclusive, well-maintained, and active), most of the declared SEPs’ technical specifications are of TS 38.331, namely Radio Resource control, followed by TS 38.211~214. LG has a lower number of 5G SEPs covering TS 38.300, namely NR and NG-RAN Overall description, which ranks as the sixth most covered technical specification in the world.

Using SEP OmniLytics, we have already uncovered LG Electronics’ top-tier SEPs in 5G technology. We have also garnered an overall picture of such top-tier 5G SEPS. Now, with Patentcloud’s Due Diligence, let us dig a bit deeper to unearth and examine LG’s diamond 5G SEP portfolio.

LG’s diamond patent portfolio includes 32 families and 532 applications. This portfolio consists of all LG’s 5G-exclusive SEPs in the top-tier (well-maintained and active) and also widely deployed (deployed in over 10 jurisdictions).

Looking at the global coverage of the portfolio, most of the SEPs are deployed in the U.S. and South Korea, followed by Europe, Japan, and China. A total of 217 applications are active patents.

Overlooking LG’s self-citations, most of the SEPs in this diamond portfolio were cited by Qualcomm and can be found in Qualcomm’s widely deployed SEP portfolio. Following in the most number of citations, include Huawei and Samsung.

When looking at the quality of this portfolio, 31 of the 32 families are deployed in the U.S., including 85 applications. Among these families and applications, 26 families (40 applications) had encountered patentability challenges. Also, 13 families (20 applications) were challenged with novelty issues, taking up 40% of the whole.

These findings strongly suggest that quite a significant number of applications in this portfolio may have potential patentability issues.

Concluding, LG Electronics holds a prominent position in the global LTE and 5G SEP landscape. From its high percentage of declared SEPs in telecommunications patents to its top-tier 5G SEPs and 5G diamond portfolio, these indicators either surpass those of Huawei or come in 2nd place. Even the technical distribution of its SEPs shows a firm stance in the global market.

However, our findings in the Quality Highlights analysis of LG’s diamond portfolio in Patentcloud’s Due Diligence show potential novelty and patentability issues in approximately 40% of the applications. For those interested in LG Electronics’ 5G patent assets, the quality of LG’s 5G SEPs should be scrutinized in addition to their essentiality.

Click the link here to get the latest (updated on March 15, 2022) interactive Due Diligence report on LG’s 5G diamond portfolio, for free!

Unearth the 5G SEP Portfolios of other companies yourself with SEP OmniLytics!