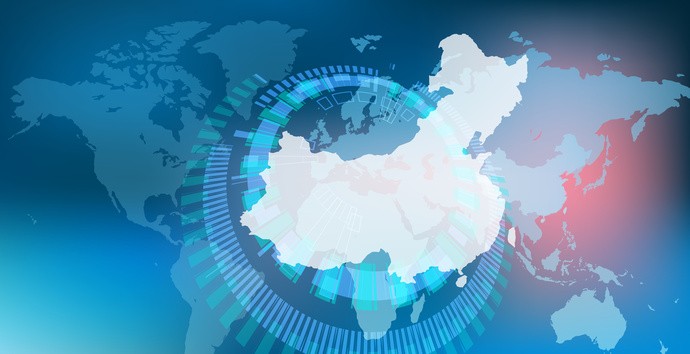 On March 16, 2021, Huawei announced that it will start demanding royalties for its patented 5G technology starting this year. China’s 5G giant will soon be initiating negotiations with businesses that are implementing their 5G standard essential patents (SEPs).

First in line, affected by Huawei’s announcement, are SEP implementers including telecoms, equipment suppliers, and end-line manufacturers, such as Samsung and Apple. But as 5G technology further develops and matures, the number and scope of businesses needing to pay royalties will gradually expand to other fields and industries. Affected sectors will include those in connected vehicles, displays, voice services, logistics, retail, smart homes, smart cities, smart factories, smart healthcare, and smart agriculture and fisheries, to name but a few.

This is Huawei’s first significant assertion after the U.S. placed trade restrictions on China during the US-China trade war that has been waging over the past two years. The timing of the trade war with the startup of 5G technology development led to the ongoing mud race to dominate the new 5G era.

In 5G technology, there is no doubt that China has gained quite some prominence, especially Huawei. In the past few years, Chinese companies have been stepping up their game in 5G technology, not just in development, but also in patent applications and SEP declarations. So much that it led to the U.S. FCC’s approval of experiments in the 6G spectrum (95GHz – 3THz) and the 6G buzz in 2020 on how the U.S. should gain the advantage in 6G due to China’s power in the 5G sector.

Is the U.S. stance validated? Do the 5G companies in China truly have such power to intimidate? Or are they just paper tigers? Using Patentcloud’s SEP OmniLytics, let us see if we can see through the smoke from a 5G SEP viewpoint.

Before proceeding further, a few notes on the terms and data used in this article.

Chinese companies in the 5G race

As of April 1, 2021, Huawei holds 4,914 simple SEP families exclusive to 5G standards under 3GPP, taking up 16.2% of all exclusive 5G SEPs, including 9,975 (22.2%) active patents. Despite the numbers, Huawei alone cannot represent the whole SEP landscape of China.

Some questions that we hope to answer in this article are:

To get a better grasp of the current SEP situation of companies in China, we will look at the situation from various perspectives to try to answer the questions listed above.

First, let’s take a look at the basics, starting from the declaration and ownership status of Chinese companies.

Moving beyond SEP declaration numbers and declaring companies, we can look further at the holding status of SEPs among Chinese companies. The actual power to intimidate will come from the holding or ownership status, thus making it important to know who owns the most SEPs. 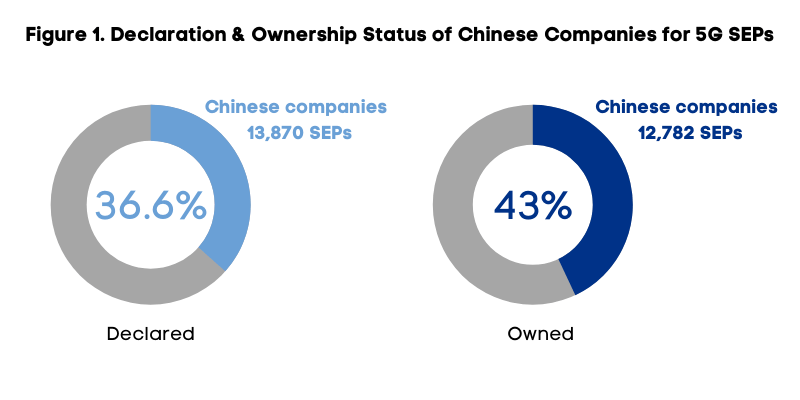 The data shows only a slight difference between the declaration and holding numbers, indicating that Chinese companies are declaring almost all of their SEPs. Only a few companies have acquired SEPs from 3rd parties with no declaration activities.

What can be deduced from the comparison of 5G and LTE SEP declarations?

This indicates a significant growth of Chinese companies in the 5G sector as the number of declared families in 5G has more than doubled in comparison to the LTE declaration numbers. The increase in proportion also shows that Chinese holders have a more prominent role in 5G technology, with Huawei, ZTE, OPPO, and VIVO as the main contributors. As 5G technology is still in the developmental stage, the number of 5G SEPs will no doubt continue to grow. 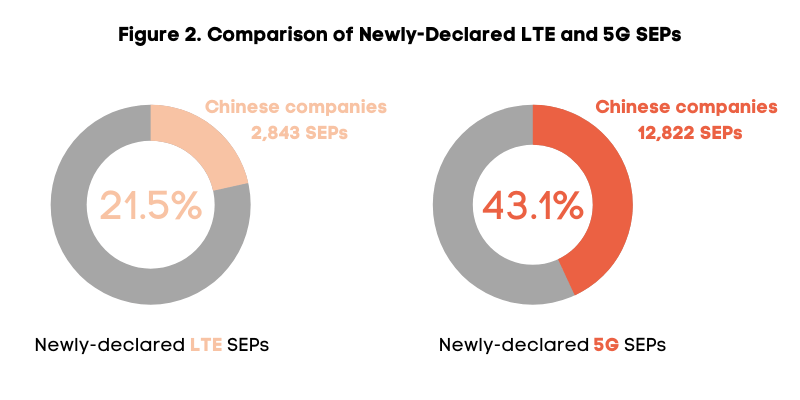 What can be learned from examining the inventorship status of 5G SEPs?

The number of inventors behind LTE and 5G SEPs can also give us a glimpse into the actual strength of China in 5G technology.

Globally speaking, the number of SEP families declared has more than doubled, but the number of inventors has decreased. Although the data has yet to reflect an increase or decrease in 5G R&D investment, it is still apparent that declaration activity is much more active. 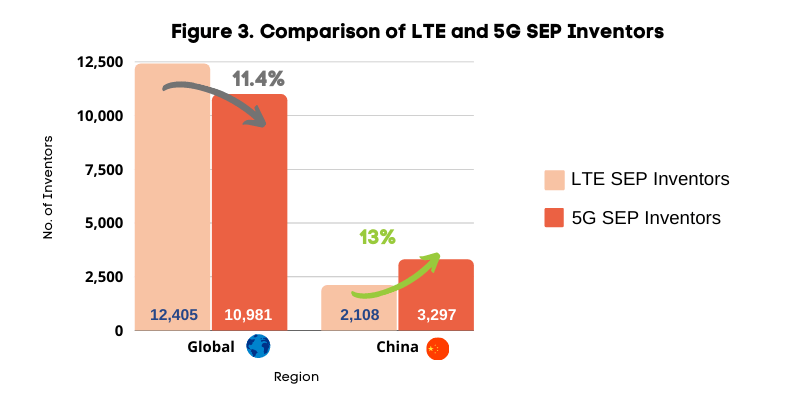 Although the changes both globally and in China are slightly different, the results may still indicate that companies have not significantly increased R&D investment in 5G or that the 5G technology has yet been patented or declared. The extent of the increase in declarations and inventor numbers can also show that Chinese companies are currently more actively invested in the declaration of 5G SEPs.

What about the regional deployment of the 5G-exclusive SEPs?

Naturally, when examining the quality and value of SEPs, you must confirm the patents’ scope of protection. To do this, we can examine the regional deployment of the 5G-exclusive SEPs with active or pending members held by Chinese companies.

Looking at the numbers, we can see that the overall number of 5G-exclusive SEPs deployed in China, the U.S., and Europe is relatively similar, with only a slightly lower number in Europe. 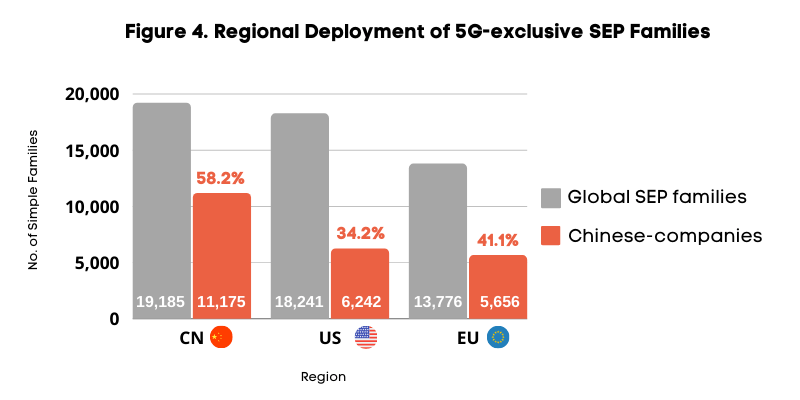 However, in comparison with the deployment status in China, it is clear that 5G-exclusive SEPs held by Chinese companies are mostly deployed and maintained in China. Of all 12,822 simple families declared, 11,175 families with active and pending members are deployed in China, taking up 58.2%.

Looking overseas, the percentage drops to 34.2% and 41.1% for those members in the U.S. and Europe. China companies deploy considerably fewer 5G SEPs in other jurisdictions, such as Japan, Korea, Brazil, Australia, Canada, and Taiwan.

Our data findings also show that despite the relatively high percentages of active or pending 5G SEPs deployed by Chinese companies in China, the U.S., and Europe, we cannot overlook Huawei’s contribution to the numbers. In CN members, Huawei’s SEPs take up 23% of the 58.2%, followed by ZTE with 10.6%. In the U.S., Huawei contributes 20.3% of the 34.2% and 24.8% of 41.1% in Europe, which are both approximately 60% of the whole.

Looking back at the three questions we proposed at the beginning of this article, the answer to the first, “What about the status of Chinese companies other than Huawei?” can be summarized here as our findings on the overall status of 5G SEP declarations made by Chinese companies:

As for our second question, “Does China have actual 5G prowess?” SEP OmniLytics’ overall analysis of China’s 5G SEP landscape summarized above depicts a fairly transparent and sound position of 5G power, allowing us to see an outline behind the smoke. The numbers examined above show that the overall stance of Chinese companies is reasonably sound with quite a proportion of SEPs declared and owned, but are less widely deployed.

The answer to the third question, “Is China’s current 5G prominence based solely on Huawei’s SEP portfolio status?” would be a positive one. With Huawei’s large portfolio, bigger coverage, and more active patents, we can deduce that Huawei is indeed the main contributor to the stance of Chinese companies in 5G SEPs.

Why not navigate through SEP OmniLytics yourself and see what insights you can find on this topic? Click the button below!