Illumina Buys Grail, Whose Patent Portfolio Is Valuable but Its Validity Remains Unclear

In March 2021, the U.S. Federal Trade Commission filed an administrative complaint against the merger, saying the combination would weaken the competition in the MCED market. In July 2021, the European Commission announced it would investigate the acquisition for antitrust concerns.

Despite the deal being under investigation, Illumina went on to complete its Grail buy in August 2021. It’s now keeping Grail as a separate entity as the regulators in the U.S. and Europe are reviewing the Illumina/Grail case. If Illumina loses the case before the FTC, Illumina may be required to undo the acquisition.

DNA sequencing has become an integral process in many biological areas, including variants tracking and cancer screening. For instance, Illumina’s sequencing platforms have been used in more than 70 countries to track COVID-19 variants. In the multi-cancer early detection market, most of the companies use Illumina’s sequencers.

With the takeover of Grail, which was spun off from Illumina in 2016, Illumina would be stepping into the multi-cancer screening market, which is estimated to be valued at US$ 50 billion by 2035. According to Illumina, Grail detects more types of cancers compared with its competitors, such as Natera, Singlera, and Exact Sciences. From a patent perspective, however, the strength of its patent assets has not been examined.

Using Patentcloud’s Due Diligence, We analyzed Grail’s patent portfolio to evaluate the potential for monetization and the validity of Grail patents in major patent offices. The date of analysis is March 23, 2022.

Grail’s Patent Portfolio At A Glance

If we break down Grail patents by legal status, it becomes clear that most patents are still pending at the patent offices. In the U.S., Grail’s home market, only 11 out of 99 patent applications are active. Half of its filings with the WIPO are pending, and the rest are inactive.

Over 90% of Grail Inventions Are High in Value

We found that Grail owns a large proportion of high-value patents in major patent jurisdictions. According to the Patent Value Rankings developed by InQuartik, 90 Grail patent families rank between A and AAA, accounting for 90.91% of its patent families in the U.S., China, Europe, Korea, Japan, or WIPO.

Patents that rank A, AA, or AAA in Patent Value Rankings have higher chances of being monetized. They are more likely to be commercialized, transacted, or litigated than the other 75% of patents in the major patent jurisdictions.

See the whitepaper for an in-depth illustration of Patent Value Rankings.

We can learn more about Grail’s core technologies by looking at patent families of greater size. Grail has 15 families with eight or more members. 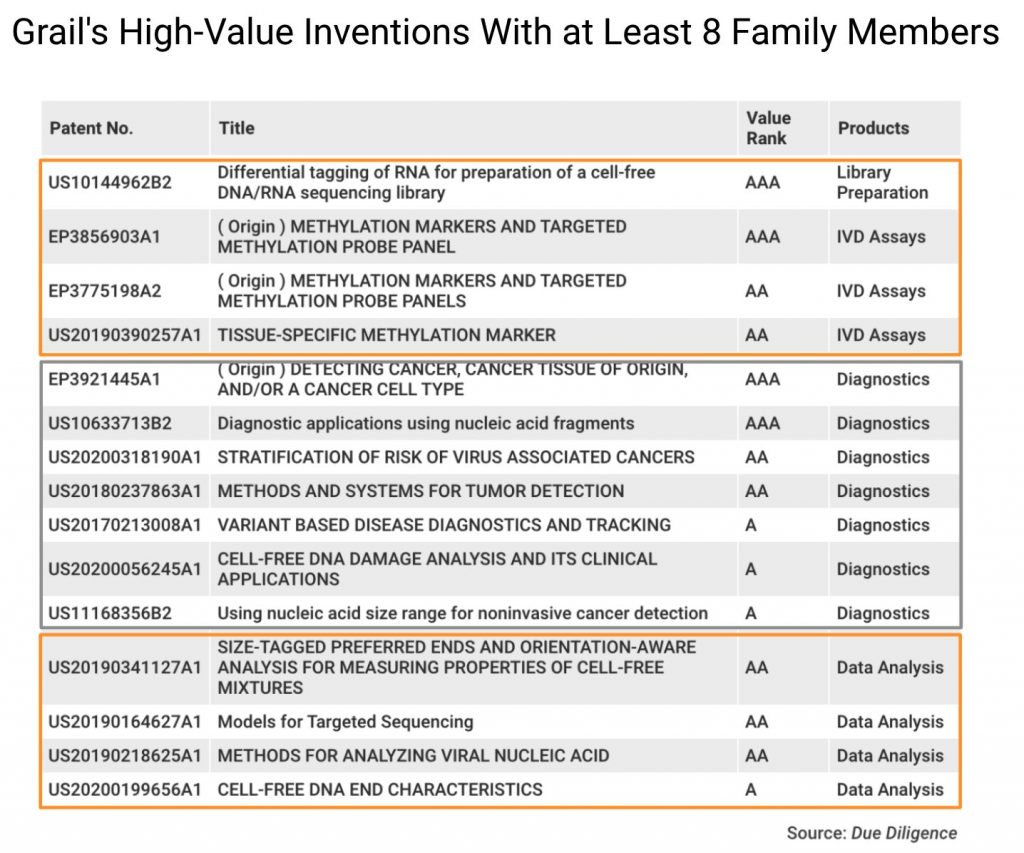 These inventions also show that Grail provides a technology portfolio for Illumina to enter the lucrative cancer detection market.

The business value of these patent families, as analyzed with Due Diligence and evidenced by Patentcloud’s Patent Value Rankings, illuminates the rationale behind Illumina’s purchase of Grail.

The Validity of Grail Patents Might Be of Concern

Although most of Grail’s patents in major patent offices have a decent chance to be monetized, the quality of its patents and patent applications remains to be seen. We found that over one-third of Grail’s U.S. patents or patent applications have been questioned for their patentability. Among Grail’s U.S. patents that are granted or pending, 33 of them have been found with eligibility, novelty, non-obviousness, or indefiniteness issues.

Given that 77.48% of Grail patent applications are pending, it is possible that these applications would be rejected or granted with validity issues.

The graph below shows the 33 U.S. patents or patent applications that have been examined and found with patentability issues by the PTO. They have been challenged for eligibility, novelty, non-obviousness, or indefiniteness during the prosecution or at the Patent Trial and Appeal Board (PTAB.)

Note that the U.S. patents not found with patentability issues are not necessarily valid. Since most of them have not yet been examined by the PTO, their patentability remains unclear. If we only look at the patent applications that have been reviewed, nearly 50% of Grail patents or applications have novelty issues.

Illumina’s 8 billion acquisition draws a lot of attention because of its leading position in nucleic acid sequencing and the merger’s impact on the global MCED market. Our analysis shows that a large proportion of Grail patents have decent chances to be monetized, and those widely deployed patents pave way for Illumina’s entry into the cancer diagnostics industry.

However, the quality of Grail patents may be of concern. Around 34% of its U.S. patents or patent applications have been found with patentability issues, and nearly 49%of its patents ever examined by the USPTO are found with novelty issues (35 US Code § 102.) Given that 77% of Grail’s applications have not been approved yet, the overall quality of Grail patents awaits further scrutiny.