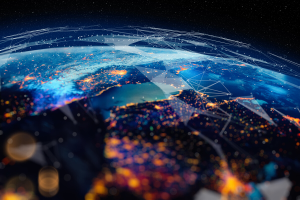 As World Intellectual Property Day approaches us, here is a reflection on how to turn the tables on information asymmetry with big data and artificial intelligence.

“Over the past thirty-five years, I have served in various fields, including technology industries, academia, law, and data science in the United States, Europe, China, Japan, and Taiwan. I have also worked extensively with patent search tools and patent management systems, and have been involved in patent activities including global patent search, deployment, prosecution, maintenance, litigation, licensing, trading, pledging, and portfolio management in a multitude of industries. Moreover, after retiring from Foxconn, for the last 16 years, I have been performing research, eager to solve the major problems surrounding patent commercialization. My hope is to create a new solution to break the deadlock and to turn the tables with big data and artificial intelligence.“

This year marks the 20th anniversary of World Intellectual Property Day. Although intellectual property laws can still be enhanced, the legal system is quite complete and does not require many improvements. Instead, the real concern is whether the newly emerging countries have fully understood the U.S. and European company’s patent strategies when it comes to the gaming industry, trade wars, and technology wars.

In other words, countries, and businesses that are caught up in trade wars, technology wars and market competition will continue to be accused, retaliated against, blocked, claimed, forced to pay royalties, or driven out of major markets, if they do not comprehend the crux of the most significant intellectual property problems and where the breakthroughs lie.

How Have the Past 60 Years of Trade Wars Affected Us?

Although it has been 546 years since Venice promulgated Patent Law in 1474, most countries have also established their patent laws. However, patent laws are usually only enforced the same as regular laws, instead of exercising their real potency, which involves taking the initiative and going against competitor countries and companies in trade wars.

Therefore, what needs to be discussed is the use of patents in trade wars; this type of activity first started in the 1960s. The U.S. made good use of their patent strength by first attacking Europe and Japan, followed by Taiwan, Korea, and Hong Kong in the 1980s, and then China after 2010.

As 60 years have passed, it is time for us to reflect on why most Asian countries and companies are still caught up in U.S. patent wars. Even though vast resources have been invested in applying for a large number of home country patents and U.S. patents, they still turn out to have little to no use. Even with rich patent assets, they are still being asserted, sued, and licensed, even becoming like an ATM for U.S. patents. However, Asian countries and companies struggle to identify the crux of the matter.

The Crux of the Problems Surrounding Patents in Asian Countries

The following are the crux of the patent problems faced by Asian countries:

Are Their Patent Solutions Truly Flawless?

Most Asian countries and their enterprises have not been able to figure out the deficiency of most U.S., European, and Japanese companies, universities, and research institutions. For example, the principles and mechanisms of the patent portfolios of European, U.S., and Japanese companies, the Patent Lifecycle Management (PLCM), and their quality and value metrics are inadequate. However, effective solutions have already been developed.

The reason why U.S., European, and Japanese companies are so competitive in terms of technology and patents is primarily due to the investment in patents and performing more research, in order for them to have at least 5%-10% high-quality and high-value patents.

A few of the “litigation-proof” quality patents will be chosen among these high-quality patents for patent infringement litigation situations. They will be used as financial benefits and reputational status spillovers for the rest of the low-quality and low-value patents, especially for U.S. federal court litigation or International Trade Commission Section 337 investigations to force counterparties to accept licenses or withdraw from the market.

In contrast, Asian companies are often intimidated by the high cost of litigation and choose to pay and surrender when they encounter lawsuits through fear. Not only has this problem not been resolved, but a new solution is also lacking.

The Importance of Innovation Development for New Patent Solutions

Lastly, I would like to elaborate on the crux of patent problems in Asian countries and companies from my past experiences, emphasizing the importance of research and strengthening the patent environment. I also would like to propose new solutions that I have proven and that I am already implementing; these solutions can be utilized by and applied to all sectors.

In Asian countries, except for a few large corporations and the academic and research community, the R&D of most corporations is only acting as a follower in product development and technological improvement. For such problems, I suggest that even though most enterprises are not able to conduct primary research, they can still use big data in advance to select topics precisely, along with applied research.

2. The Training of Patent Professionals

3. Big Data and Artificial Intelligence Are the Basics of Data Analysis

Moreover, patent professionals do not often realize that his or her judgment can be affected by inconsistent patent quality. Those who fully understand the fact that big data, artificial intelligence, and data science are impacting and changing the way we search and analyze are few and far between.

In other words, the patent search, analysis, and patent landscape of the past did not serve a useful purpose when it comes to valuable analytics. It appears that the cause of this issue was a lack of scientific basis, methods, and tools to support it. The result? Wasting resources, time, and money on reports that are not meaningful or useful for impactful decision-making.

Thanks to big data, artificial intelligence, the integration of professional practices, and the many startups and solutions around the world, such as Apex Standards, Docket Navigator’s Litigation File Analysis, InQuartik’s Quality Insights, Due Diligence, and SEP Intelligent Analysis Reports; patent professionals no longer need to dig through large amounts of patent data for lengthy reports, they can now have more time and resources available for critical analysis in order to support operational decisions.

4. The Quality Insights of U.S. Patents

The quality of each country’s patents is maintained based on different patent office requirements, and it is almost impossible to gain insights into each patent’s quality without intensive research. Nowadays, with access to U.S. patent data, the startups, as mentioned earlier, can now timely provide comprehensive and accurate data for patent quality insights.

With a combination of artificial intelligence, software technology, and advanced user interfaces, patent professionals can have instant access to structured prosecution and post-grant proceedings data, to fully grasp the patent scope and any changes that may occur to each patent.

Additionally, patent professionals can now accurately gather all of the IP5 and WIPO family prior art and second-degree to sixth-degree prior art that may affect the validity of each U.S. patent. Furthermore, they can discover more relevant prior art through the semantic analysis of patent specifications and claims. These different levels of prior art can uncover the quality of U.S. patents on a large scale. They can be used to explain why around 75-80% of U.S. patent infringements and IPR cases are invalid, unenforceable, or limited in scope.

In short, artificial intelligence will revolutionize the litigation and transaction game for U.S. patents. Companies, regardless of geographical location, will no longer be disadvantaged in this asymmetric patent war when the quality of U.S. patents can be instantly identified.

Patent professionals usually perform due diligence through traditional search methods, focussing on the number of patents. However, it is difficult to evaluate the patent assets of a particular patentee or technology, therefore making it harder for the patentee or any third party to make an accurate analysis of the patent assets from a decision-making perspective.

Finally, AI-powered due diligence evaluations highlight patent quality and value, and their relationship to the patent technology and patentee in the same field, including assertable targets, competitor patent development situations, and competitor citation history.

All of this critical information allows the patentee and third party to fully understand the situation of the patent assets and the importance of high-quality and high-value patent portfolios. Thus allowing them to stop wasting resources acquiring and maintaining a large number of low-quality and low-value patents.

In the past, patent professionals mostly worked on their own. They only shared information through meetings or by e-mail, resulting in inefficient patent operations, hard to consolidate information, and a generally substandard experience.

Today, a new generation of SaaS companies—such as InQuartik and its revolutionary Patent Vault—offers cloud-based integration and a secure collaborative workspace for patent work (you can think of it as the Google G Suite of the patent world.) This technology enables patent professionals to collaborate and share knowledge securely in the cloud, across countries, organizations, departments, and teams. It increases not only operational efficiency but also puts organizational memory and knowledge management theory into practice.

The world, as we know it is changing, people are changing, and working environments are also changing. To ensure innovation, growth, and development aren’t stifled, we must always be able to work, collaborate, and share ideas without boundaries such as geography and distance.

The Rise of East Asia in Technology