Major appliances (also known as white goods) include items such as:

White goods were traditionally painted or enameled white, and many of them still are.

Key Facts About the US Major Appliances Industry

The major appliance manufacturing industry is profoundly globalized, with numerous huge domestic and foreign companies. Most of these companies have mighty brand recognition and compete against each other rather aggressively in the US market to produce many different consumer goods such as fridges, freezers, washing machines, and dishwashers. Due to the comparatively high cost of producing these goods in the US, many major appliance companies choose to produce their consumer goods offshore.

The companies with the greatest market share in the US major appliance industry include Whirlpool Corporation, Haier Group Corporation, and Electrolux AB.

The question surrounding who originally invented the electric washing machine is controversial. The earliest photographic evidence displays a picture of a woman sitting by a “Nineteen Hundred Company” washing machine in the Nov 1906-Apr 1907 issue of “Cassier’s Magazine.”

This picture and the accompanying story was printed some years before Alva J. Fisher’s US patent US966677 was issued on August 9, 1910, covering an electric washing machine. Due to this patent, Fisher is commonly credited with being the original inventor, however, the earliest inventors remain unknown.

The following table of patent data tells an interesting tale:

If we use the patent drawings as the only prior art, we can clearly conclude that Fisher wasn’t the original inventor of the electric washing machine.

We only need to look at figure 2 from the Woodrow patent, which was granted before Fisher had submitted applications for any of his three patents listed in Table 1 to see this for ourselves.

All of the patents listed in Table 1 (other than the Fisher patents) have an application date before 27 May 1909.

In July 2017, Vinotemp sent correspondence to Wine Enthusiast, alleging that its “Evolution Series” wine refrigerator units were infringing upon its D711,936 design patent and its trade dress. Wine Enthusiast responded to the letter from Vinotemp by filing an action seeking declaratory judgments of patent invalidity, non-infringement, and lack of trade dress rights.

Vinotemp counterclaimed for infringement of the D396 Patent and its trade dress rights, amongst other issues.

Let’s take a look at the design patents and the alleged infringing articles using Design Search by Patentcloud.

Here are the design patent drawings for the D396 patent:

And here are photographs of Wine Enthusiast’s alleged infringing product:

In the instance of a design patent infringement lawsuit, the plaintiff must be able to prove that an ordinary person would not be able to differentiate between the patented design and the potential infringer’s design when they are placed side-by-side.

We utilized Design Search by Patentcloud to see if the D711,936 patent appeared in the search results when we dropped Wine Enthusiast’s rack into the image-based patent search engine. A design patent search should be the first step to take when performing a search for potential prior art and possible infringement risks.

We dropped the flat, bird’s eye view picture of the Wine Enthusiast rack into Design Search, we then filtered by US patent office and typed in the keywords “wine rack” to narrow down our search results. 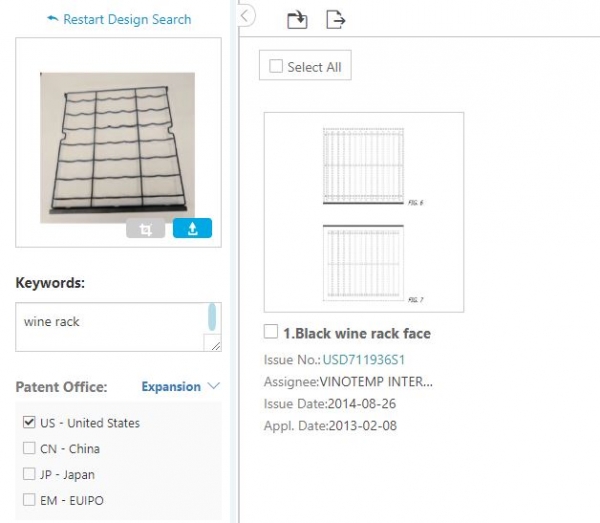 By performing the aforementioned actions, we were able to find the original D711,936 patent, thus allowing us to compare the two designs side-by-side using the Vs feature. 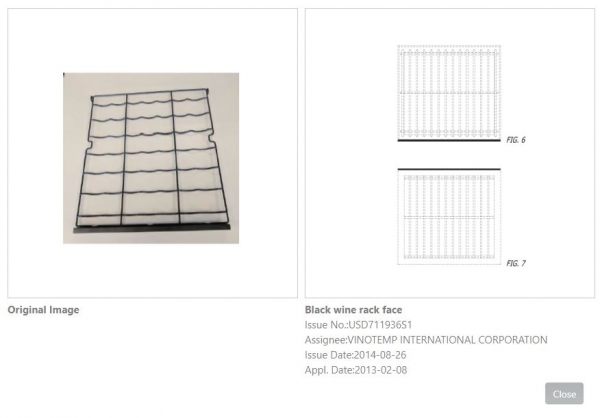 When presented with both designs, we can then utilize the image inspection feature to enlarge the images to have a really good look at them.

I would consider myself to be an ordinary person, I do not possess any design skills, nor do I have any previous experience in design. Upon inspection of the two designs side-by-side, I can see differences between them, such as:

Let’s get back to the lawsuit, the judge’s opinion, and the final decision.

Firstly, Judge Cote discussed the counterclaim for design patent infringement. After examining the D711,936 design patent drawings and comparing them with the photographs of the Wine Enthusiast refrigerator rack, Judge Cote decided that no ordinary observer would consider that the D711,936 Rack Face was similar enough in design to the shelf front on Wine Enthusiast refrigerator.

Judge Cote stated that the ornamental features of Vinotemp’s Rack Face, specifically the “J” shape at the top, the thickness, and the refrigerator shelf attachment method were not present in Wine Enthusiast product.

“Concentrating on minor, isolated differences should not distract from the overall impression of a design. However, when considering the scope of the D936 Patent, it was apparent to the court that these design differences were not minor, and actually constituted the entirety of the claimed design except for its color.”

The trade dress claim under Section 43(a) of the Lanham Act was upheld. Judge Cote stated that Vinotemp, which described the arrangement of its Rack Face as “giving the impression the [wine] bottles are ‘floating’ within the storage unit,” had understandably asserted it qualified for trade dress protection and that Wine Enthusiast’s use of a comparable trade dress could create consumer confusion.

The powerful design patent search tool that is Design Search allowed us to check and compare the two designs in just a few clicks, without having to search through endless paperwork, documents, and pictures. Imagine the time Judge Cote could have saved by using something like Design Search!

It’s also worth mentioning that Design Search can be used to potentially avoid the future risk of infringement altogether, by checking to see what other prior art is already out there and whether or not a design around is required.

We utilized Design Search by Patentcloud to search for design patent prior art, for a 7-day free trial of this image-based, design patent search tool, simply click the button below.