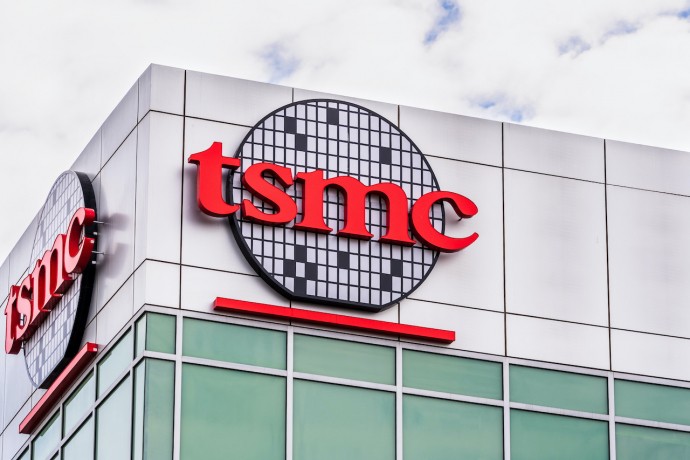 This article was written by Y.P. Jou, founder of InQuartik, and supplemented by Teresa J., InQuartik’s Content Writer.

Over the past year, Taiwan Semiconductor Manufacturing Company Ltd. (TSMC) has been hailed as Taiwan’s “Guardian Mountain — Protector of the Nation” due to its key industrial and geopolitical role in the US-China trade and technology war, leadership in 5nm technology, and excellent chip manufacturing capacity.

The global chip shortage has called attention to the global reliance on the world’s largest chip foundry for chips. Earlier this year (2021), Germany’s Economy Minister appealed to TSMC for auto chips. Japan, the U.S., and the European Union have followed suit in asking the Taiwanese semiconductor manufacturer to increase chip supply. A few months later, the U.S. Senate passed the US Innovation and Competition Act of 2021 for a US$ 250 billion investment in the nation’s manufacturing and technology sectors to compete with China. This includes the decision to subsidize TSMC’s US$ 12 billion chip fabrication plant currently being built in the Phoenix area of Arizona.

How did TSMC come to reach such prominence? Is there a secret recipe for success that other businesses can employ? Let us take a deeper look.

Excluding the founders and its management, we can pinpoint three important factors that contribute to TSMC’s success:

These factors have shaped TSMC into Taiwan’s “Guardian Mountain” with its strong stance and substantial influence in the global industry, supply chains, and value chains.

In April 2021, we used Patentcloud’s Due Diligence to analyze TSMC’s patent portfolio to better understand its patent portfolio management and investment in process technology. As of this date, TSMC has 64,937 patents in its portfolio.

First, looking at how TSMC’s patents are deployed globally,  approximately 50% are in the United States, followed by Taiwan and China with 19% and 16%, respectively. 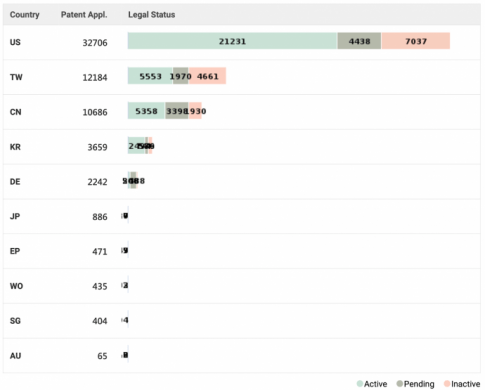 From the Technical Field dashboard, we can see that since TSMC’s founding in 1987, its patent applications have been concentrated in the same field: H01L — Semiconductor devices. This indicates that TSMC’s investment is quite concentrated in a certain technology field.

We can also observe the proportion of TSMC’s self-generated patents to get a glimpse of its R&D strength. According to the “Transacted Patents” chart, we can see TSMC filed over 90% of the patents in the portfolio with very few acquired from others. TSMC’s R&D strength is also demonstrated with less than 3% of its patents jointly applied or co-owned with others.

The fact that only 0.1% of TSMC’s U.S patents have litigation records may indicate a relatively higher level of uniqueness of its patents, making it a world leader in chip process technology. In addition, the percentage of patents involved in PTAB invalidation lawsuits is also very low, which implies that competitors may find it difficult to bring evidence and initiate procedures to invalidate TSMC’s patents, providing more evidence to support the quality of its patents.

Lastly, let us take a look at TSMC’s potential targets for monetization using the “Potential Targets of the Portfolio” chart. The top three monetizable targets for TSMC are IBM, Samsung Electronics, and GlobalFoundries, of which the latter quickly settled a dispute and came to a global patent cross-licensing agreement with TSMC after TSMC filed an infringement lawsuit in 2019. These companies are either world-leading foundries or advanced process developers, and from this chart, we can see the similarities in technology between them and TSMC, making it worthwhile for TSMC to observe whether there is any possibility of infringement.

Implementing the recipe for success

As we mentioned before, high-quality talent, advanced technology, and smart patent management are the keys to building a world-class enterprise. However, implementing these three factors is easier said than done, especially for more traditional manufacturing industries. I believe that there is no reason to be pessimistic. As long as any industry player (including startups) is willing to invest time, resources, and effort in implementing these strategies, there is a possibility of moving ahead in the game.

TSMC’s prominence can be seen through our analysis of its patent portfolio. According to recent statistics disclosed by Taiwan’s Ministry of Economic Affairs (MOEA), TSMC applied for 1,263 patents in the first half of this year (2021), setting a record for the first time to apply for over 1,000 patents in a six-month period. This growth in patent applications amounts to a 237% in growth in comparison with the same period of last year.

TSMC has also become the most valuable company in Asia, surpassing Tencent with US$552 billion at market close on August 3, 2021, further proving TSMC’s global strength and stance.

Get the full Due Diligence report for TSMC’s patent portfolio for free!

Analyze patent portfolios for other companies with Due Diligence today!