On Monday, August 26, 2019, GlobalFoundries filed 19 patent infringement lawsuits and 2 International Trade Commission (ITC) actions against Taiwan Semiconductor Manufacturing Company (TSMC) and other defendants, including Apple, Google, and Nvidia, among others.

InQuartik’s Litigation Daily provided detailed information about the patents in the case.

Quality Insights (QI) was then utilized to look at ‘357 in depth, and it revealed that although ‘357 looked clean initially, it actually had two abandoned family members: “EP1787331A2” and “US20070290250A1.”
This valuable information was discovered with just a few clicks, giving a hint of just how powerful and effective AI-powered tools like QI can be when it comes to patent litigation. Patentcloud truly helps IP experts to get the essence of the patent itself, and figure out a clear way for the litigation strategy at an early stage.
Since IP law experts have opined that GlobalFoundries’s litigation efforts are likely more about negotiating a licensing agreement than engaging in a protracted lawsuit, the information and insights that Patentcloud, and in particular QI, deliver can be crucial for the defendant, TSMC, in developing an effective strategy and response.

A Quick Overview of the Dispute

When GlobalFoundries announced on Monday, August 26, that it had filed multiple patent infringement lawsuits against Taiwan Semiconductor Manufacturing Company (TSMC) in both the United States and Germany, the world—and certainly the tech world—immediately took notice.
It’s worth mentioning at this stage that TSMC was founded in 1987, whereas GlobalFoundries was founded in 2009.
The lawsuits, which were filed with the US International Trade Commission (ITC), in the federal district courts of Delaware and Texas, and in the regional courts of Dusseldorf and Mannheim in Germany, allege that sixteen of the GlobalFoundries patents had been infringed upon.
Twenty defendants were named in the lawsuits, including big-name tech companies including Apple, Google, Nvidia, Qualcomm, and MediaTek, in addition to TSMC.
Besides seeking “significant damages from TSMC based on TSMC’s unlawful use of GlobalFoundries’ proprietary technology in its tens of billions of dollars of sales,” GlobalFoundries also appears to be looking at halting US imports of products such as the iPhone XS and AirPods, as they contain processors made with the technologies covered by these patents.
This, of course, would not affect TSMC directly, since it does not export processors directly to the US, but rather its customers, like Apple, who do import products containing these processors to the US.
For its part, GlobalFoundries appears to have instigated the lawsuit in light of the ongoing US-China trade war. According to Gregg Bartlett, senior vice president of engineering and technology at GlobalFoundries:

Additionally, one of the complaints even states:

TSMC has recently expressed an interest in building a new manufacturing facility in the US, but has not reported any tangible steps towards implementing its ostensible interest. In contrast, TSMC completed building the most advanced manufacturing facility of its kind in mainland China last year. By bringing advanced 16nm FinFet to China, TSMC has positioned itself to benefit further from the shift in global supply chains out of the US and Europe into Greater China.

In a written response, Taiwan-based TSMC, stated that it was “disappointed to see a foundry peer resort to meritless lawsuits instead of competing in the marketplace with technology.” The company added: “ We will fight vigorously, using any and all options, to protect our proprietary technologies.”

To discover more about the situation, let’s start by taking a look at Litigation Daily—InQuartik’s free online resource that collects the latest information on US District Court, PTAB, and ITC cases.
Whether you are a lawyer at the pitching stage, or a defendant who is trying to collect as much information as possible to prepare for a lawsuit, Litigation Daily is a great tool and is certainly worth trying.
Just moments after the announcement of the lawsuits, the filing information—along with the summarized rejection records, PTAB records, and potential prior art references—had already been gathered and organized in a clear table in Litigation Daily: 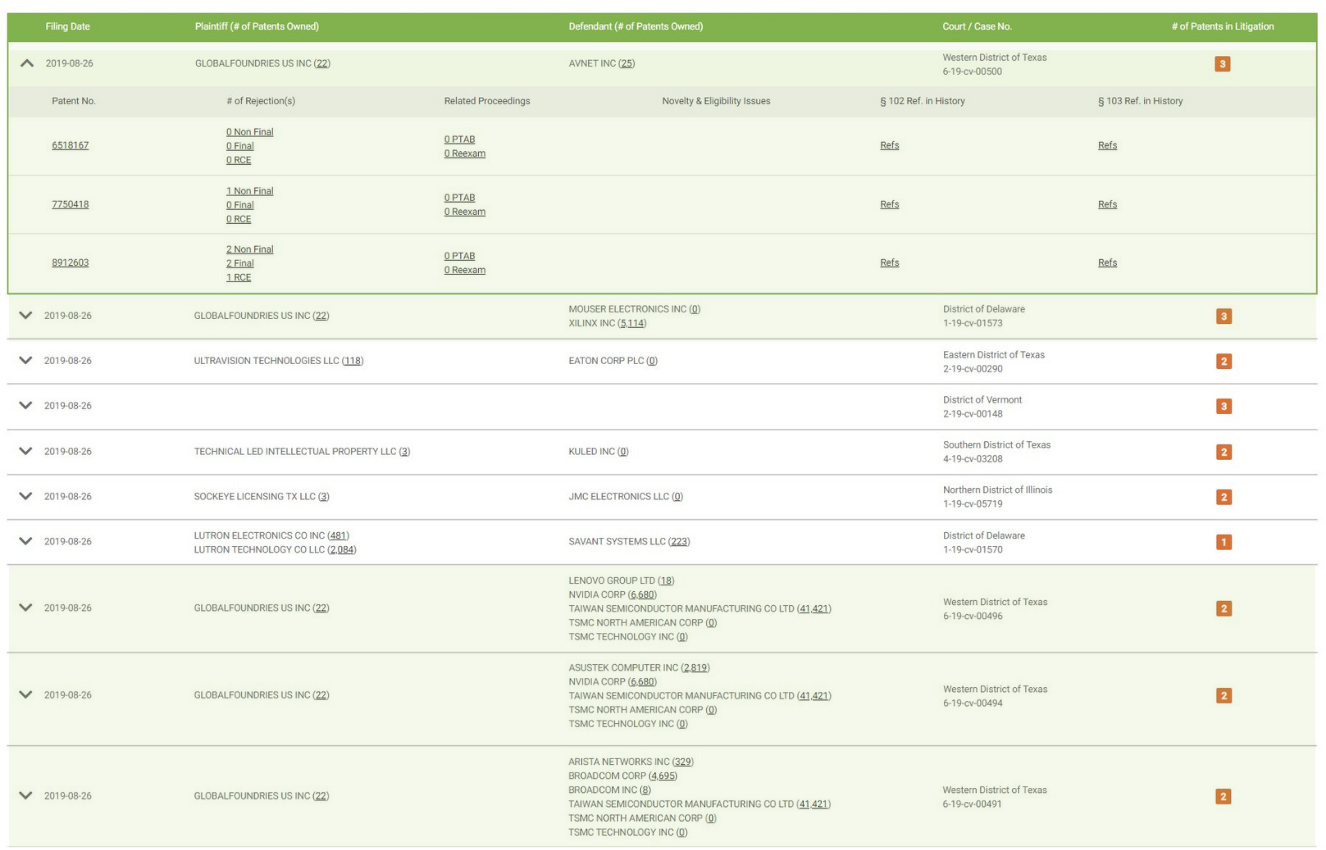 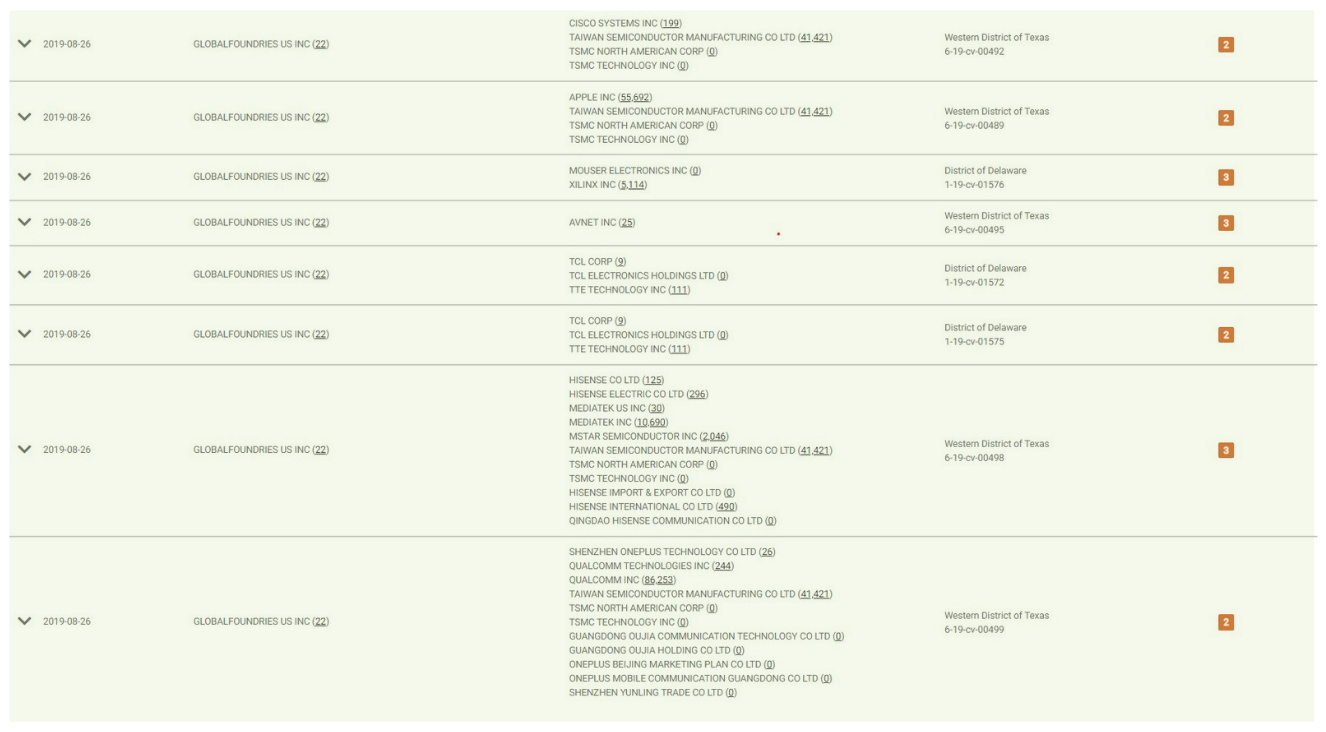 The information that we gathered from Litigation Daily doesn’t end here. With one click, we identified all of the patents in each lawsuit. By doing so, we noticed straight away that four patents are involved in five out of nine complaints against TSMC. These patents are ‘178, ‘643, ‘357, and ‘877.
Patent ‘357, does not have any rejection records in the prosecution, nor are there any validity challenges in the post-grant proceedings. However, it is important to note that there are some potential prior art references that may be used against this patent in the event of an invalidity action.

Clicking on the View button under the Assignment Data column delivers even more detailed information from Patent Search: from the data in the bibliography, it can be noted that the original assignee of this patent is IBM, which is not the same as its current owner—GlobalFoundries. Although this doesn’t have a direct impact on this lawsuit, it is still worth keeping in mind and researching later in the transaction records of these patents. 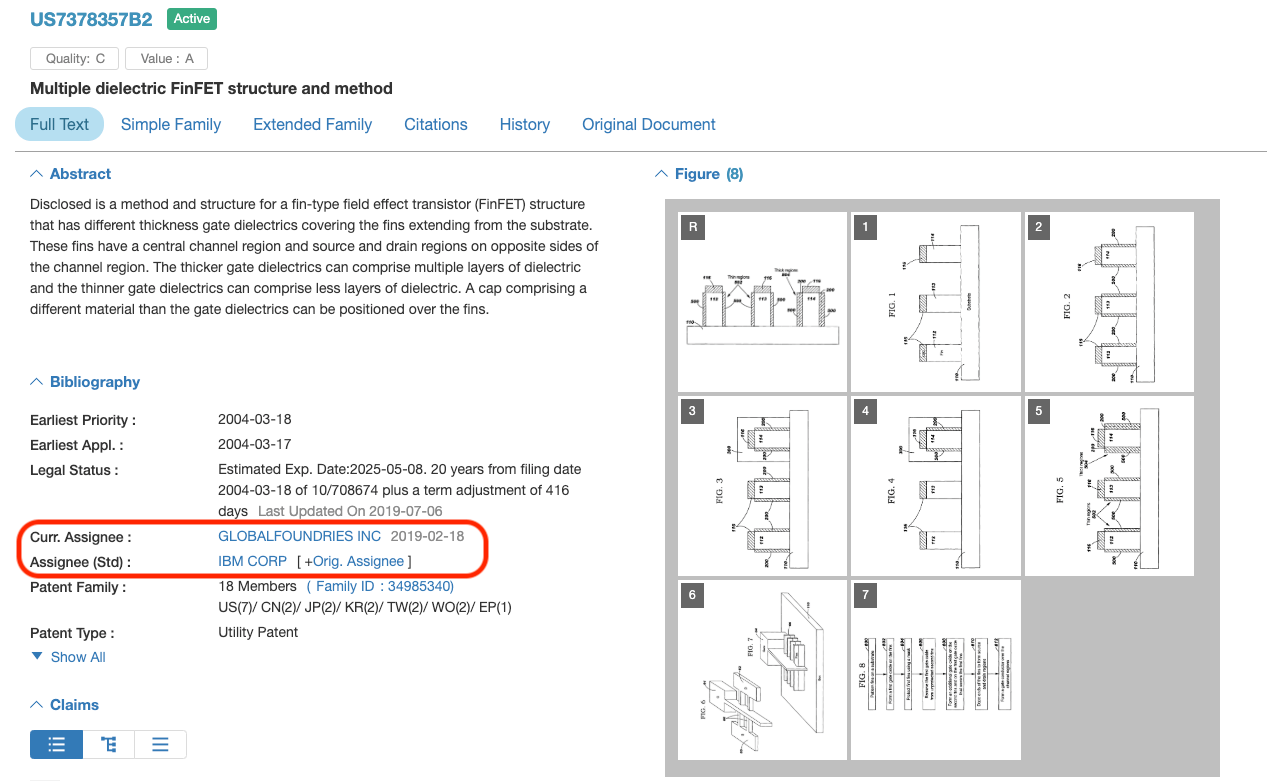 After a preliminary investigation with Litigation Daily, wouldn’t it be interesting to take an even closer look at the sixteen patents at issue?
This is where Patentcloud’s Quality Insights (QI) comes in to play. With just one click, we can get a comprehensive overview of the validity of these patents and examine each patent closely.
Though we already know from Litigation Daily that there are no rejections or PTAB invalidity records for the ‘357 patent, we can still use the Overview tab in QI to thoroughly examine this patent’s file wrapper data: 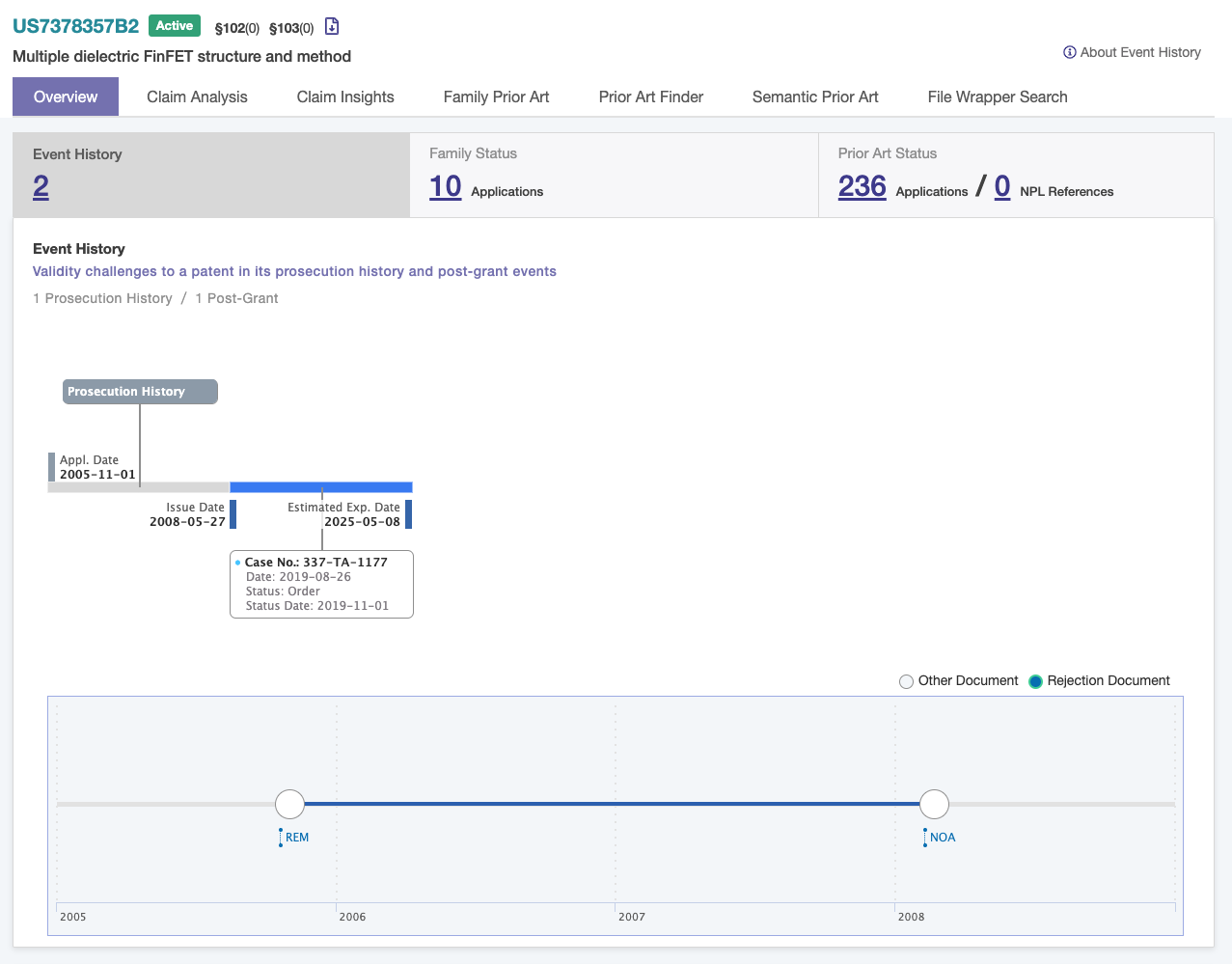 By looking at the Family Status tab, we can identify any abandoned family members, which is a great strategic move when preparing an Inter Partes Review or an invalidity action proposal.

Take the ‘250 patent, for example. Under the History tab, we can identify the reason for application abandonment: “Abandoned — Failure to Respond to an Office Action.”

Similarly, we can uncover the reason for the abandonment of EP1787331: the application was rejected by the EPO examiner.[1] 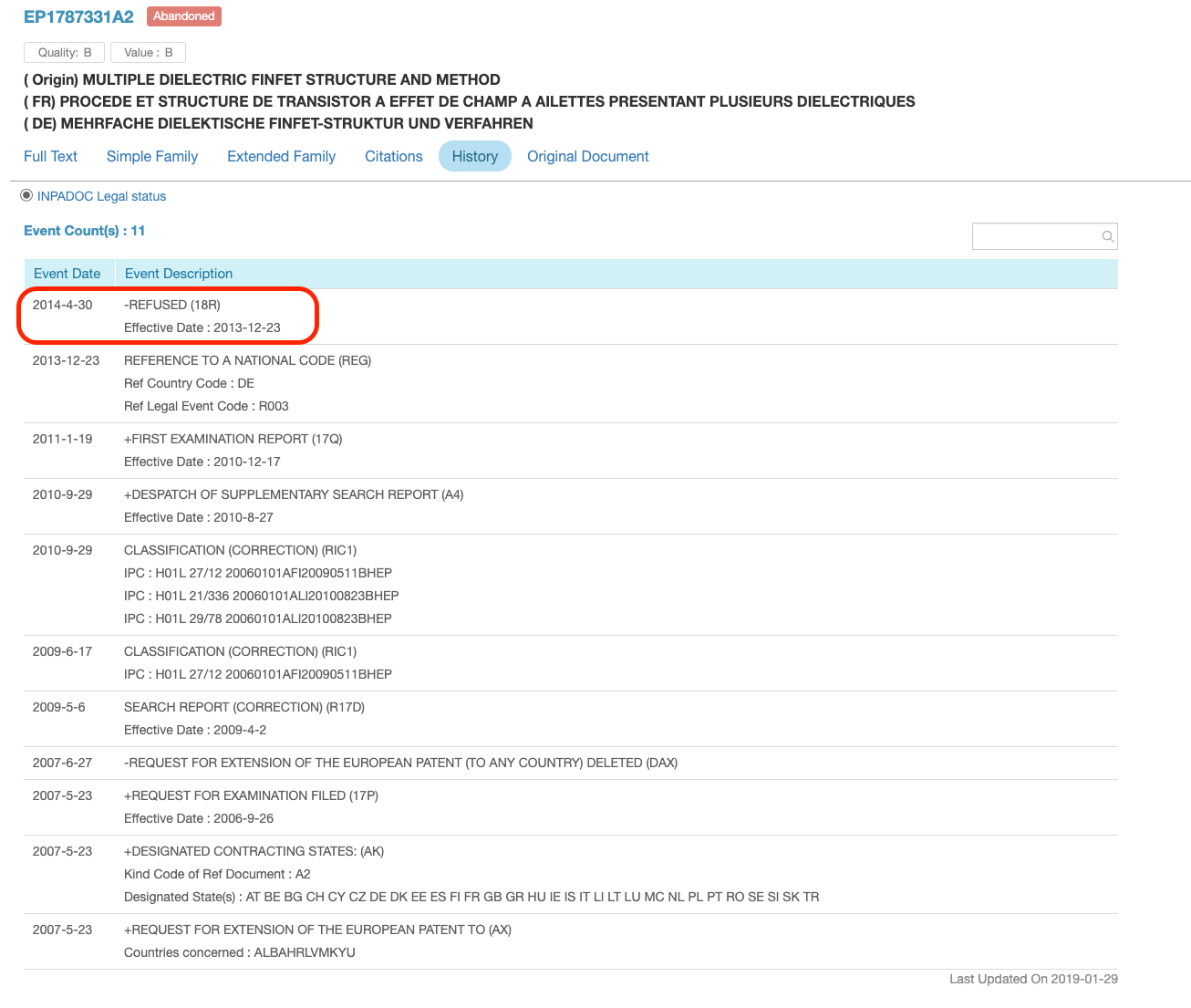 In the event of needing to compare patents side-by-side to see the differences between the patent at issue and its family members, simply select the patents from the list and click Compare on the toolbar: 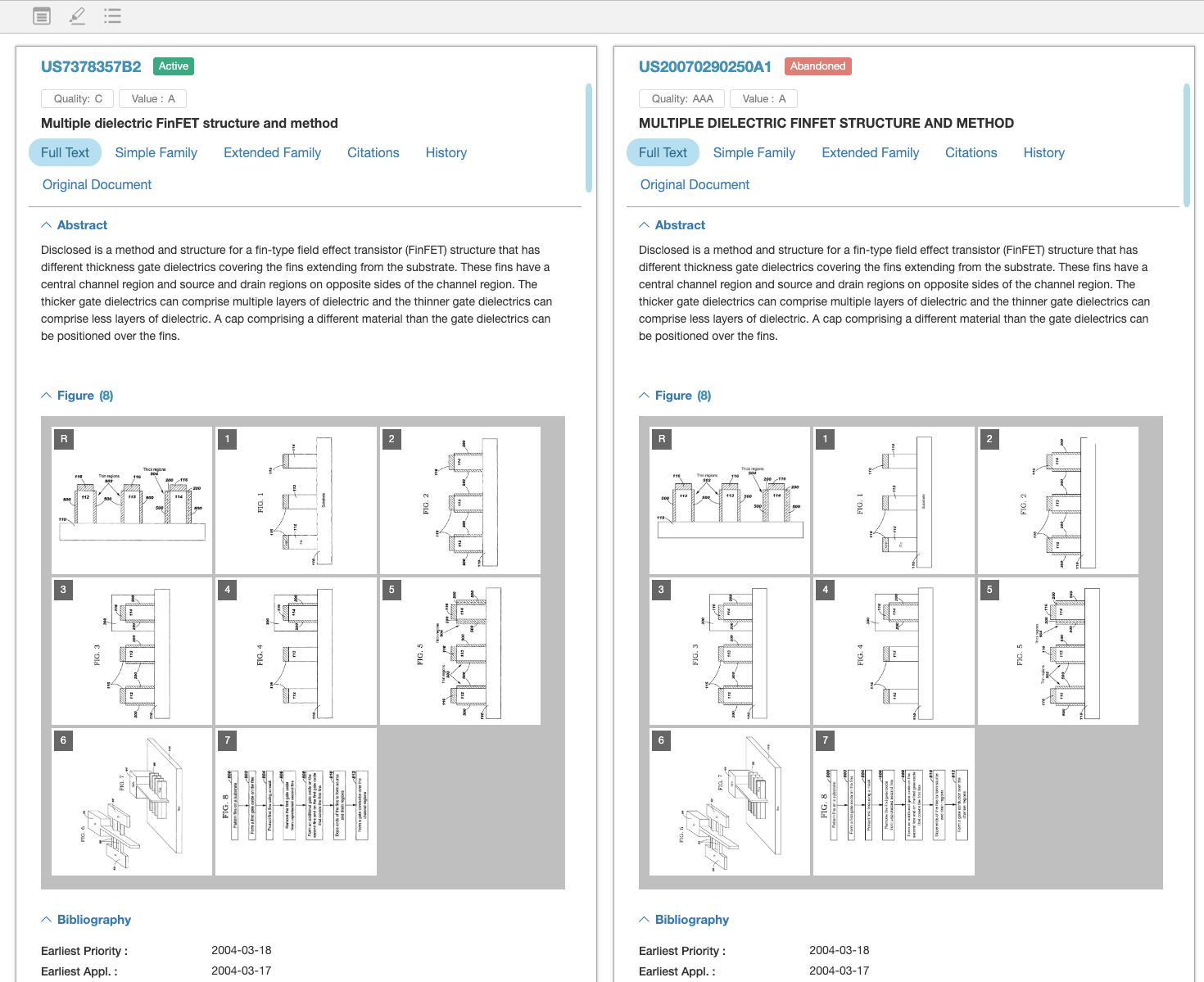 Despite the fact that the title, abstract, and images seem to be the same for both patents, if we continue to browse the claims of the two patents, it’s apparent that there are differences. Although we might not be able to make an exact judgement from this, it could give us a hint as to what caused the difference in the patent’s legal status. 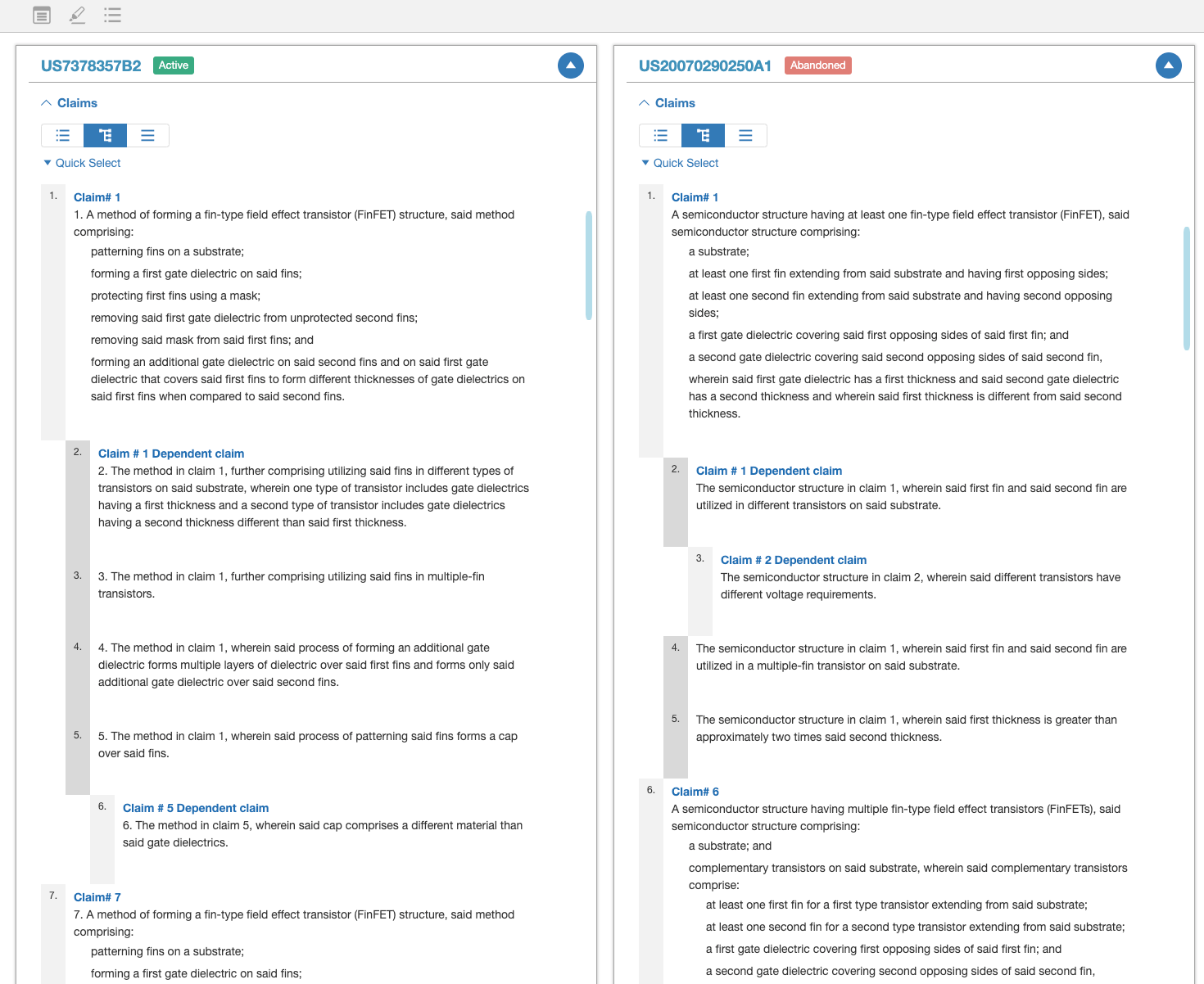 We can also use the same technique as before to compare the prior art references with any patents in the same tab, utilizing the simple click-and-compare function.

By duplicating the above information, we can create a comprehensive summary table of the patents-in-suit, and quickly confirm that patent ‘357 is involved in five out of the nine cases.

What’s more, it seems to be the most vulnerable patent in these cases. 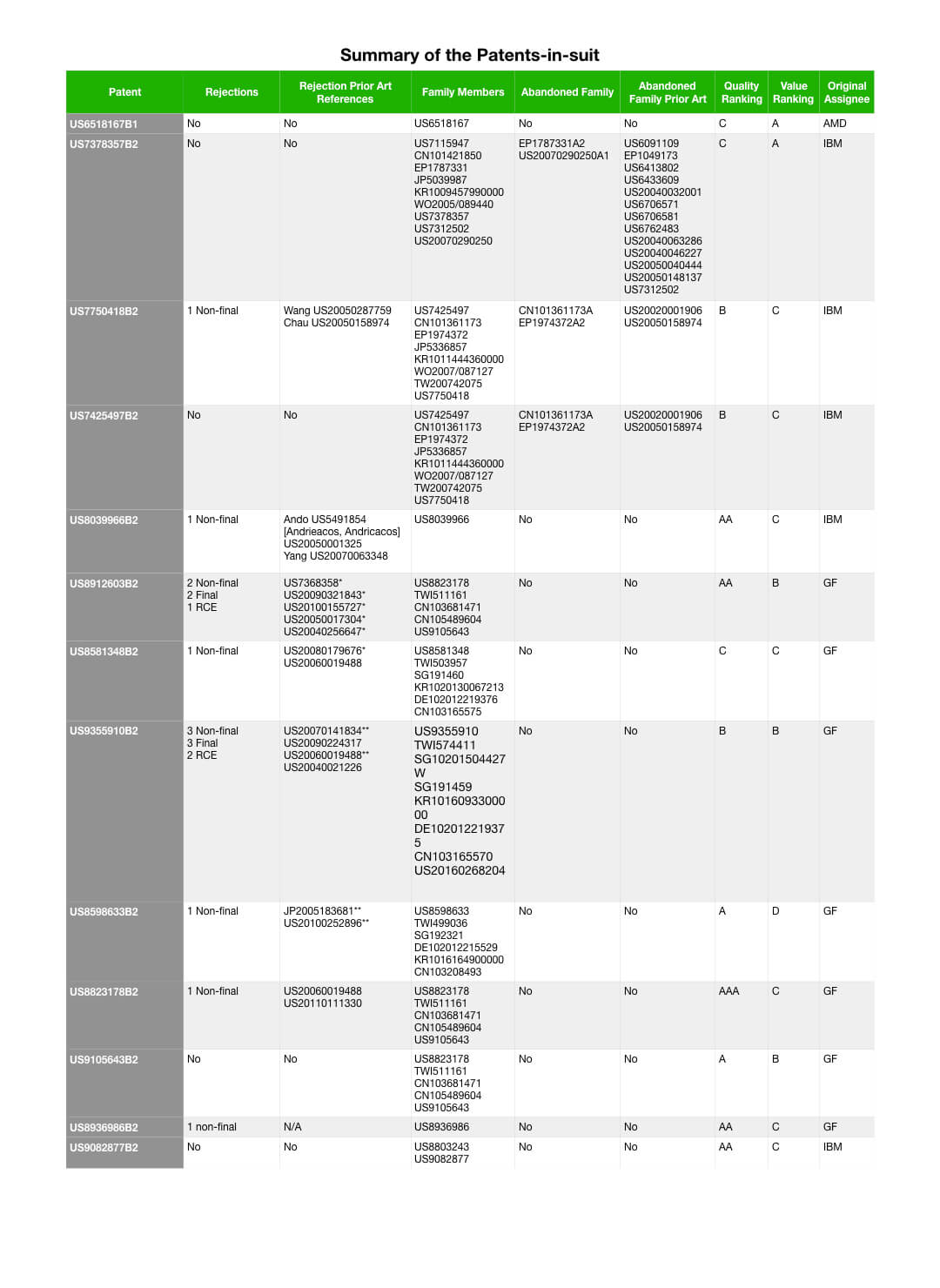 Another way we can leverage QI to discover the weak patents in the lawsuits is by using the Claim Insights tab to identify claim construction issues during prosecution. We already know from Litigation Daily that patent ‘178 has one non-final rejection in its prosecution history. Firstly, Claim Insights helps us by extracting the keywords in the claims. These keywords are then searched across a digitized copy of all the prior art references cited by the examiner during prosecution. The matches are then organized in a table for easy comparison.

The searchable original document, the legal basis of the rejection, and the details about the rejection are provided as well. 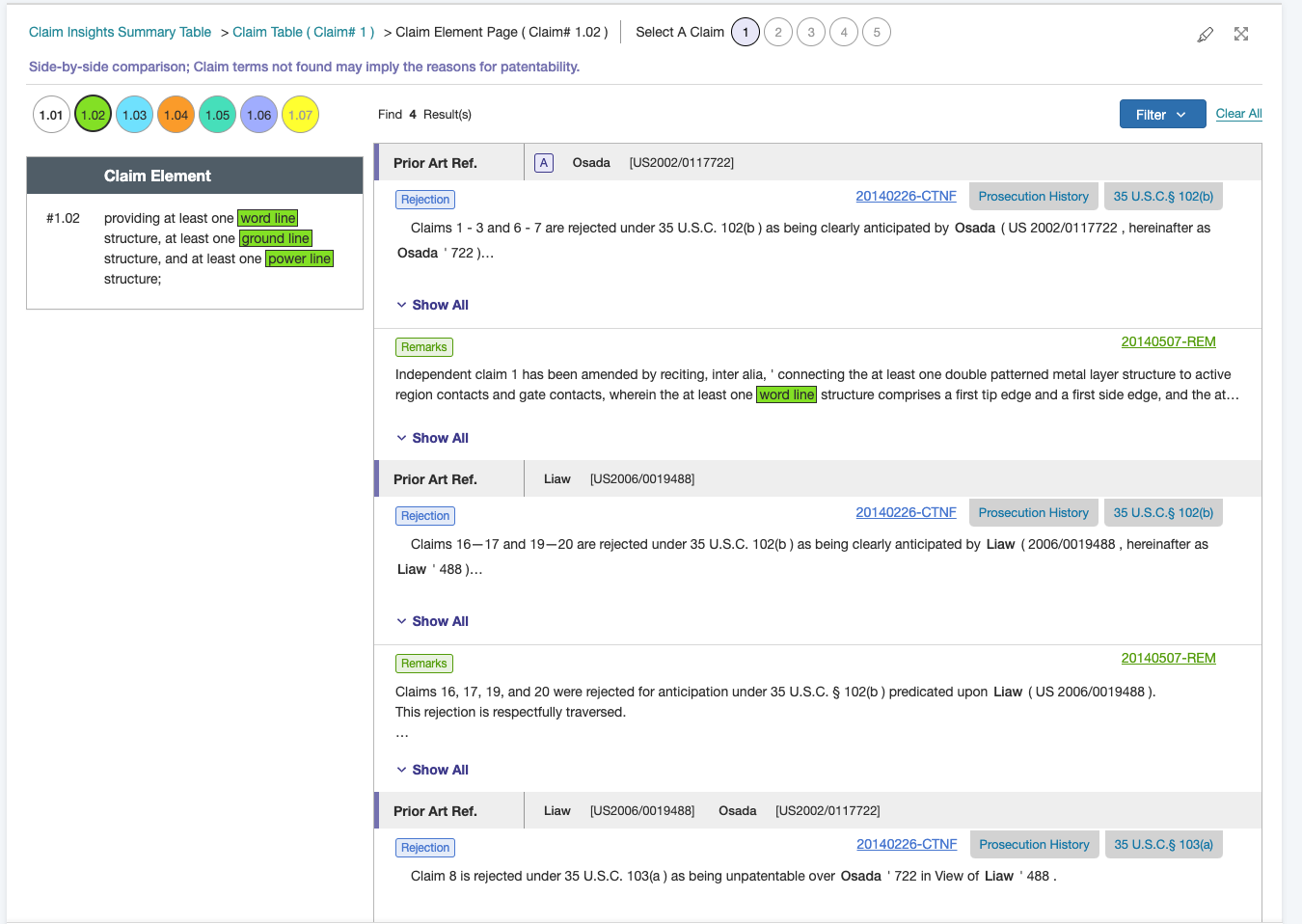 This quick investigation — carried out in just a few steps — has enabled us to proactively plan a strategy for the future stages of the invalidity action.
Gathering this amount of first-hand data and valuable insights would traditionally require a tremendous amount of effort, both in terms of time and resources. What used to take hours—even days—can now be accomplished in just minutes with an an AI-powered patent intelligence platform like Patentcloud.
It goes without saying that having access to such technology-driven tools greatly improves efficiency during the earliest and most important phases of the invalidity action process.
This is equally true for both the plaintiff and the defendant. With solutions like Patentcloud, defendants accused of infringement can quickly gain an understanding of the strength and validity of the patents in the lawsuit. These tools can even help to find the prior art needed to invalidate the patents at issue.
Plaintiffs, on the other hand, can use these tools to make sure that they are asserting the strongest patents, before they even file a lawsuit, greatly increasing their chances of success and reducing the risk of their patents being invalidated.

A Final Word from the Experts

To discover more about the case from a legal point of view, we spoke to several experts in IP law, who weighed in with their perspectives and key take-aways.
First, it is clear that TSMC is the main target in this case. All of the other parties involved, including the big names like Apple and Google, are “down-streamers.” This is why they all need to be captured as a matter of law, as addressed in the ITC Kyocera case.
Interestingly, prior to these lawsuits, GlobalFoundries had no real track record of filing infringement lawsuits. In fact, the company had only really been involved in six lawsuits as defendants. This means that the patents in this case may not have been involved in any litigation previously, which could raise questions about their quality.
Mintz Levin, which is the lead counsel for GlobalFoundries in all of its filings, was chosen to lead this campaign, with Farnan and Mort serving as local counsel in the District of Delaware and Western Texas, respectively, for filing and service purposes. It seems obvious that an effort of this size could not have been undertaken without months of preparation.
Yet, the IP legal experts we spoke to claimed that a protracted—and costly—legal battle with TSMC isn’t really what GlobalFoundries wants. Rather, licensing is.
As Patrick Moorhead, the president of Moor Insights & Insights, said in a Wall Street Journal article:

You can bet GlobalFoundries was trying to collect royalties behind the scenes, failed, and will now let the courts decide. The end [manufacturers] aren’t the main target, but targeted to put pressure on TSMC.

Another expert mentioned that a scenario in which GlobalFoundries’ main goal is achieving an import ban on TSMC products is very unlikely. The reasons for this are:

The question that needs to be answered now is: does GlobalFoundries have the patents needed to make TSMC settle?

Be sure not to miss the next part of this article, where we will dig deeper into the patents involved in this litigation.

[1] After further investigation, we discovered that the patent was rejected on the basis of Art. 123(2) of the European Patent Convention: the applicant, by making some amendments following the examiner’s discovery of some prior art references, introduced new subject-matter which extended beyond the content of the application.

A Win for the Semiconductor Industry